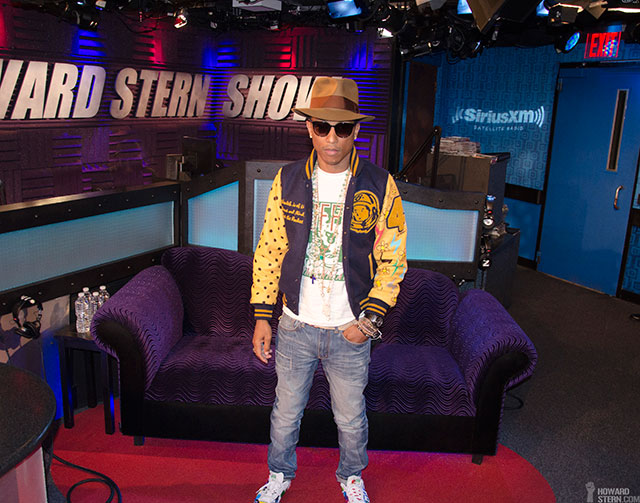 There is no hit-maker around that can touch Pharrell these days. Howard was an early fan of Pharrell and his group N.E.R.D. (Pharrell thanked him for being one of the first to support them back in the day).

The big fan of big hats stopped by this morning and Howard went through many of Pharrell’s monster hits to find out what exactly was in his head.

“Rock Your Body” — Recorded by Justin Timberlake. This song (and a few others on Timberlake’s album) was originally written for Michael Jackson, but Pharrell could never get the song to him. It was an enormous hit for Justin, and Michael noticed. Pharrell said that he hung out with the late King of Pop after the songs had topped the charts and Michael sang them all to him word for word. Pharrell and Timberlake’s collaboration was highly successful, but they did not work together on the follow-up record. Pharrell claimed that he asked Justin to wait for him, but the label was pressuring Timberlake and he went ahead with another producer. As for Michael, he did interview Pharrell for Interview Magazine in 2003, which was a special source of pride for the new King of Pop.

“Slave 4 U” – Recorded by Britney Spears. This song was also written with a Jackson in mind – Janet Jackson. She passed on it (which she must have regretted) and it became a huge hit for Britney Spears – certainly you remember her slithering around with that giant python at the MTV VMAs.

“Hot in Herre” – Recorded by Nelly. This song was a monster hit, but nobody except Nelly and Pharrell seemed to think it would be. As they worked on it, they were the only two who were dancing around to the chorus, which is now instantly recognizable.

“Drop it Like it’s Hot” – Pharrell wrote the chorus and his verse of this song, Snoop Dogg (aka Snoop Lion) wrote his own verse. Pharrell collaborates with Snoop to this day, and when Howard asked him how much weed Snoop really smokes, all Pharrell said was: ‘Dude … dude… dude.’ Snoop smokes a lot of weed. So much that in a recent recording session, Pharrell said the aroma was so strong he wanted to crawl under the desk and hide for a while.

As for his own weed-intake, Pharrell admitted to enjoying the occasional brownie.

“Hollaback Girl” – Recorded by Gwen Stefani. Pharrell and Gwen stayed up all night in a recording studio to come with a new song. Pharrell thought of the classic Queen song ‘We Will Rock You’ and that bleacher-stomping sound. It was a new idea for Gwen and they wrote up a cheerleader-style tune. The song was a big hit in 2004, and is still stuck in everyone’s head. B-A-N-A-N-A-S. 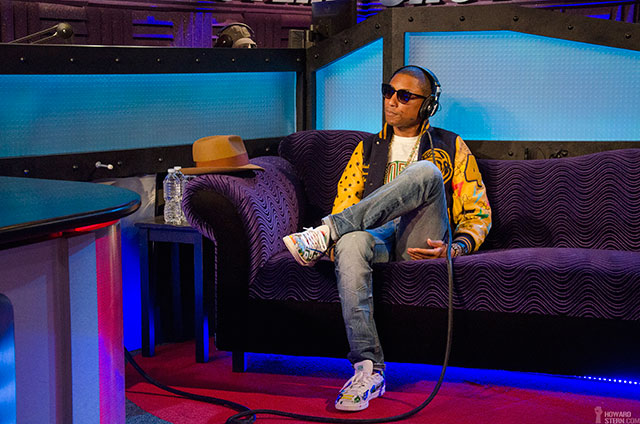 “Blurred Lines” – Recorded by Robin Thicke. The song of last year (and the surprise hit of the past few years). The record company sat on the record for a few months (suits are always geniuses) but the song (along with the NSFW video) conquered the world. Pharrell didn’t agree with the resultant Marvin Gaye lawsuit, and felt like you can’t copyright a genre or a feel.

Pharrell says the songs message was misinterpreted by many people. He was trying to say that we all have animal instincts and that the woman wasn’t a ‘possession’.

“Get Lucky” – by Daft Punk. Pharrell was in the south of France and heavily into Nile Rogers (of Chic). When ‘the Robots’ played him a track they had made with Nile Rogers on guitar, Pharrell knew it was a good fit. He slammed the French-equivalent of a Five Hour Energy shot and wrote ‘Get Lucky’.

And, of course, “Happy” – which he recorded himself. He originally gave the song to Cee Lo Green, who recorded it. His people decided that it wasn’t right for Cee Lo and the song was shelved. Of course, it’s now been a number one hit for Pharrell for nine weeks. Still, Pharrell admitted “Cee Lo’s version burns my version.”

Other highlights from Pharrell’s interview:

Pharrell revealed that he once made love to eight women – one at a time. It was a decade ago and, as Pharrell put it, “I was out of my mind.”

As an adolescent, Pharrell managed the rare feat of being fired from three different McDonalds restaurants. He even applied to a fourth, but they had caught onto him. “I was a poor worker.”

Anyway, Pharrell is married and has a little boy, so, yes, he’s HAPPY.

The Billy Joel Town Hall and Everything Else!