Sia Opens Up About Her Life, Her Songs, and Performs Live on the Stern Show

Sia Opens Up About Her Life, Her Songs, and Performs Live on the Stern Show 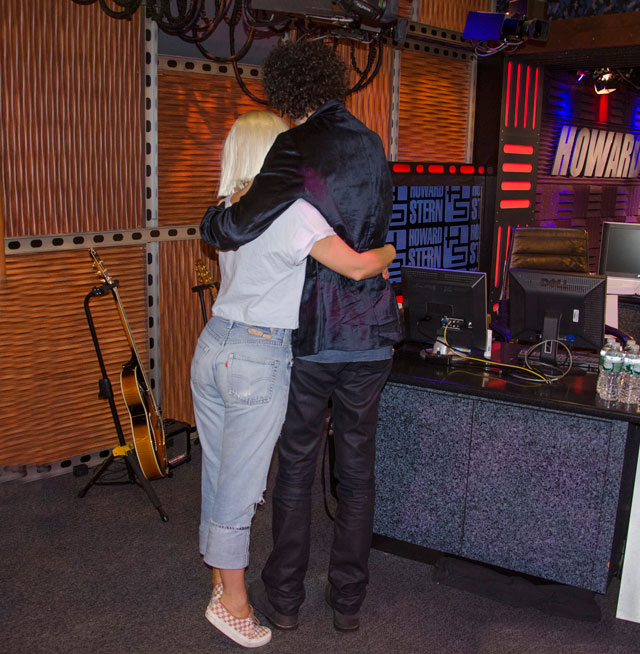 Sia has written some of the biggest songs in the past two years, but you might not have any idea that they came from her. Rihanna’s “Diamonds” was possibly the biggest song of 2012—Howard sang it constantly. Classic rock-loving Fred Norris even played it coming back from commercial a few times. Sia also wrote songs for Britney Spears and Beyoncé, among others, and she stopped by this morning to sing Howard and Robin a few numbers from her catalogue.

Radio is the perfect medium for Sia because she does not want to be seen or photographed. Unless it’s for a cause that benefits “dogs or queers,” as she put it.

She opened up about her difficult relationship with her musician father, who admitted to being jealous of Sia’s success. After his daughter hit it big, she offered to provide some background vocals on an album he was working on and he said no: “It’s my album and you’re not on it.”

Sia said she smoked a lot of pot as a teenager, then went on to drink and do many other drugs—one time ordering “two of everything” from her dealer— and even attempted to take her own life once. She blames the excessive pot smoking on her bipolar disorder, which was diagnosed when she was well into adulthood.

She’s had relationships with both men and women—the women, admittedly, being so butch that she actually thought one of them was a cute boy. An early boyfriend of Sia’s was killed when he attempted to get into a taxi that didn’t want to drive him home because he was so drunk. The door caught him and pulled him under and the taxi ran over his brain stem, killing him.

All this is enough to wreck most people, but she lived through it and went on to craft some of the most beautiful pop songs of the last few years.

Howard took her through her biggest hits, even if they weren’t all recorded by her.

“Diamonds” — Probably Sia’s most famous song, it actually wasn’t written with Rihanna in mind. She wrote the song in about 10 minutes, after a particularly bad bout of depression. She thought about the kids in the dance tents taking ecstasy at music festivals. Rihanna had a “hold” on another song Sia had written, but Beyoncé came along and snatched it up. Sia said she felt bad and offered her “Diamonds” instead.

“Pretty Hurt” — This is the song Rihanna had on hold. For some reason, Sia explained, her management made an oversight and didn’t pay for the track, so Beyoncé came along and bought it up. Sia said Katy Perry loved the song so much that she texted Sia saying she was “pretty hurt” that Sia didn’t offer the song to her. Sia told her to check her inbox, because she had sent the song to Katy months before.

“Titanium” – A song Sia wrote that she wasn’t supposed to perform. It was intended for Alicia Keys, but DJ and producer David Guetta liked Sia’s demo vocals so much that he used them. Sia admitted that she is not a huge fan of Electronic Dance Music and she played Howard a little bit of the song as it sounded like when she wrote it.

“Wild Ones” – A huge hit, Sia really didn’t want to sing this one. She flatly stated that she wasn’t about to sing lyrics like “shut down the club,” even though she had written them. But, as you’ll notice, she does.

Howard asked Sia why she preferred writing songs for other people instead of performing them herself. Sia loves to write and sing but being famous … not so much. She has taken to completely hiding her face when she performs (like she did on “Late Night With Seth Meyers,” when she had Lena Dunham dance around and lip-synch for her).

Check out Sia’s new album, out July 8, and for all your Sia needs, check out her website.