International TV, movie and Broadway superstar Zach Braff stopped by this morning to discuss the success of his Kickstarter-funded movie ‘Wish I Was Here’ and singing and dancing in eight shows per week in Bullets Over Broadway. 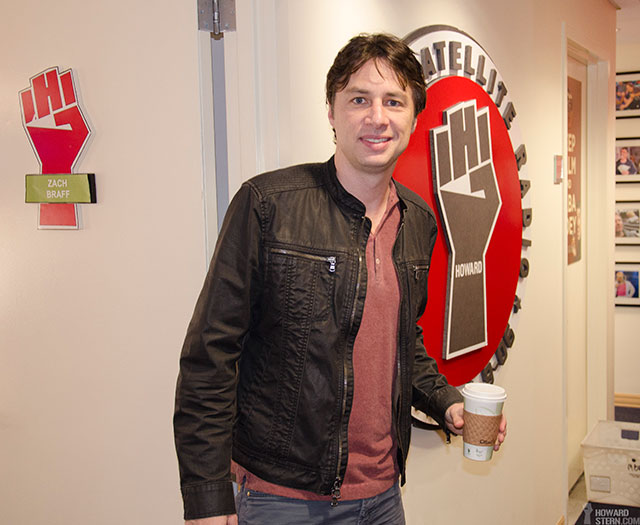 First, securing funding for his new movie was controversial. He raised over three million dollars, but some – including Seth Rogen – insisted that he could have gotten funding the old-fashioned way and didn’t’ have to ask his fans to help.

Zach countered that if he wrote big-budget blockbusters like Seth does, he would have been able to get studio funding, but he makes ‘smaller, more personal films’.

He claims he spends his one day off per week travelling to different cities for advanced screenings for the fans who funded him, which was one of the perks. He seemingly had no idea that paying off the ‘perks’ that people got for donating at different levels would be so much work. Even the T-shirts are giving him a problem – people will hit him up on Twitter with stuff like ‘You call this a medium?’ He made promises to 47,000 people who donated to the film, so he’ll be busy for a while.

@zachbraff Great appearance on @sternshow today. Honest, funny, and interesting. You and Howard have great chemistry

The six days a week he isn’t flying around for screenings, he’s singing and dancing his ass off in the hit Broadway musical ‘Bullets Over Broadway’, which was written by comedic legend Woody Allen.

Woody is one of Zach’s heroes, so he was incredibly nervous auditioning and performing for him. Zach said Woody was so painfully shy that he didn’t even address the company until the very end of rehearsal.

Just after Zach had introduced his (now ex-)girlfriend to Woody, he got an email from ‘Woody Allen’ saying how nice it was to meet her and asking for her phone number. Maybe they could get coffee. Thankfully, Woody wasn’t trying to steal Zach’s girl, it was actually his young female assistant who wanted to get together with her.

As Zach wrapped up, and Howard and Robin both promised to see his musical, he asked Fred to play him out with the Stern Show classic ‘This is Beetle’, and Fred obliged.

Check out Zach’s new movie ‘Wish I Was Here’ and catch him on the stage in ‘Bullets Over Broadway’.