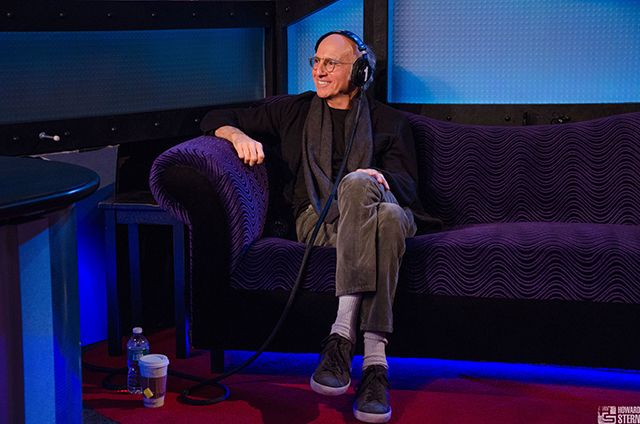 Comic icon Larry David has long been one of the Stern Show’s most sought-after guest, and he finally made his long-awaited debut this morning!

Everybody was excited for Larry to sit down with Howard and take him through his extraordinary show-business career.

Here are the highlights from Howard’s interview with Larry David:

Howard was interested in hearing about Larry’s military career. He joined the reserves to avoid going to Vietnam, which he said he had no intention of doing under any circumstances.

He said he had to go to reserve meetings once a month in Brooklyn and he and the other war-avoiding young men would cover their ’70s afros with crew-cut wigs.

Then he heard about a psychiatrist who would write a note and get you out of the whole reserve thing, so he decided that was his strategy. He got the letter and proceeded to act crazy and really sell it to his commanding officer.

After stints as a private chauffeur and a cab driver, Larry started doing stand-up in New York, working amid future stars like Andy Kaufman (whom Larry admitted to finding a little annoying), Elayne Boosler, and, of course, Jerry Seinfeld.

He famously had a contentious relationship with stand-up comedy, then he got the comedy writer’s dream gig: “Saturday Night Live.” He wrote for a year for a cast that included Gilbert Gottfried, Billy Crystal, and his future “Elaine,” Julia Louis-Dreyfus.

Larry wrote sketches that killed during rehearsal, but he said week after week, nothing would make it on the air. He finally got so fed up that he walked up to executive producer Dick Ebersol right before the live show was to begin and laid into him about the quality of show and said he quit.

Dick just nodded and Larry said he stormed off.

On his way home, however, he said he was overcome with dread. His next-door neighbor, Kenny Kramer (inspiration for the “Seinfeld” character of the same surname) told him to just show up on Monday like nothing ever happened. Larry did, and it worked.

This, like many other instances in Larry’s life, inspired an episode of his legendary, ground-breaking sitcom “Seinfeld,” which is often called the greatest sitcom of all time.

Larry, who co-created the series with Jerry Seinfeld, told Howard that new season was total agony for him. “Like a relationship, I just didn’t think I could keep it up,” he said, before pointing out: “Not in the erectile sense.”

Larry said he was incredibly passionate about every episode, threatening to quit more than once if the network interfered with a word in their script.

Larry said he knew how great the episode was and announced that he’d quit if the network screwed with it. They didn’t.

He said “The Chinese Restaurant” is another example of an episode the network hated, but Larry and Jerry loved.

Larry told Howard that the show, unlike “Seinfeld,” isn’t fully scripted. He said he writes an outline for each episode and has the cast improvise the scene.

One question Larry is constantly asked: “Will there be another season of Curb?” He told Howard that, while he can’t guarantee anything, “the odds are against it.”

Howard asked how Larry would feel about not getting to write a final episode for “Curb Your Enthusiasm” and Larry replied that after the negative reaction to the “Seinfeld” finale he has no further interest in “wrapping things up.”

Thus, Larry said he’s concentrating on diversifying. He wrote and will star in “A Fish in the Dark,” a play that opens in February on Broadway. He told Howard he often wonders what he got himself into, but that it’s sure to be an entertaining show.

Check out “A Fish in the Dark,” scheduled to play on Broadway from February to July.