AUDIO: Kirstie Alley Stops by the Stern Show to Sing a Birthday Song to Howard

AUDIO: Kirstie Alley Stops by the Stern Show to Sing a Birthday Song to Howard

“Happy birthday, motherf-cker,” the actress exclaims during her interview 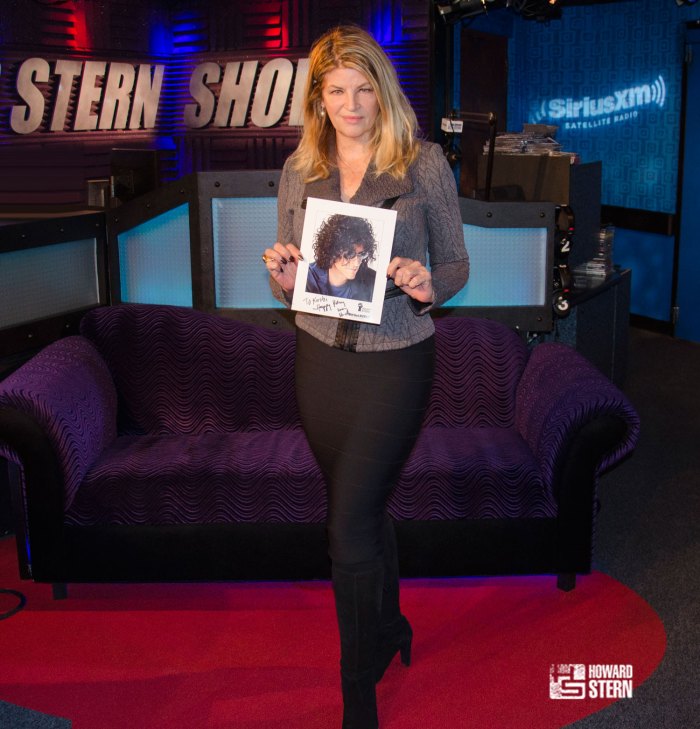 TV and movie star Kirstie Alley stopped by to celebrate hers and Howard’s January 12 birthdays together. She revealed she recently lost 50 pounds and also talked to Howard about everything from her sex life to Scientology to her unique family living situation.

She even sang a song to the King of All Media (below).

Check out the rest of the highlights from Kirstie’s visit (below).

Kirstie is no push-over when it comes to her kids, but as long as they aren’t “dilatants” she will let them live with her communally—what she calls “Italian Style.” They have to contribute to the household by putting in some work and her steadfast rule is “no banging” in the house. If either of her kids are in a serious relationship, that’s a different story, but she’s not into random hook-ups at home.

Her daughter was in a serious relationship recently and her boyfriend was living with the Alleys. Unfortunately, he was killed in a motorcycle accident just before Thanksgiving, which was devastating for the whole family.

While they were on the subject of her kids, Howard asked if she’s friendly with their father—actor Parker Stevenson, to whom Kirstie was married from 1983 to 1997. The answer was no, but they are on speaking terms. It took a long time for Kirstie and her ex-husband to start talking again—in fact, she laughed, it just happened this year.

Howard asked about Kirstie’s controversial religion: Scientology. Kirstie’s kids are both into it, she said, and she herself is now an Operating Thetan level seven. Howard asked about former Scientologist Leah Remini and Kirstie’s feelings about the remarks that she’d been shunned by Scientologists. Kirstie said that if everyone was distancing themselves from her, she would ask herself what she’s doing to turn everybody off.

It’s not just family that has the run of Kirstie’s properties—she also has many, many animals, including 14 lemurs. She used this extravagance to illustrate her relationship with money, telling Howard, “I spend it like a ho.”

“You have more animals than we do,” Howard said. “Are there cats and dogs sleeping in your bed at night?”

And what kind of havoc does this wreak on Kirstie’s love life? She’s not a very big dater, it turns out. She has been going out with some of the guys who’ve asked her but she realized that she isn’t the best date. She has no tolerance for guys who aren’t funny or are arrogant. She did promise to call up one morning while she’s making love and tell Howard and Robin exactly how good or bad the sex is.

In terms of her acting career, Kirstie is looking toward Broadway next – either the musical “Mame” or a stage version of her cult-classic film “Drop Dead Gorgeous.”

Kirstie talked about how her career started in L.A. after a cocaine addiction gave her the courage to get out of Kansas. But once she got to California, she stopped doing the drug altogether.

She got roles right away, the first notable one being “Star Trek II: The Wrath of Kahn.”