Vinnie Favale Checks in as David Letterman Checks Out

From falling in love with Joe Manganiello to her "underestimated" ass, the "Modern Family" star spilled all 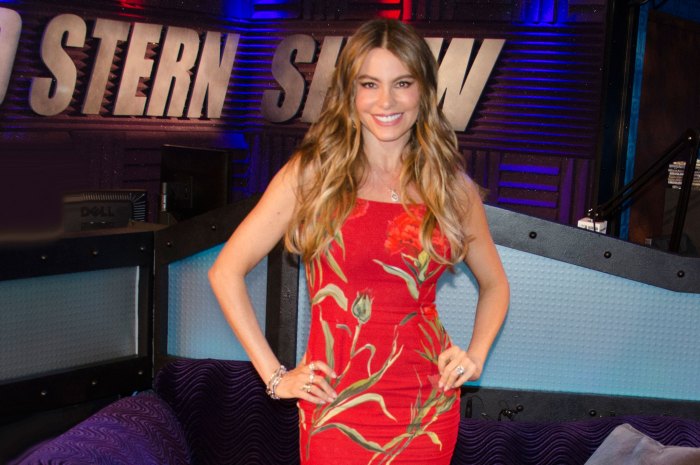 Sofia Vergara stopped by the Stern Show to promote “Hot Pursuit,” her forthcoming film which has her partnered with Reese Witherspoon. Her candid interview with Howard ranged from her recent engagement to why she feels her ass is under appreciated. Check out a few things we learned during Sofia Vergara’s Stern Show debut (below).

1. Joe Manganiello Worked Hard to Get Sofia on Lockdown

It’s clear Sofia is madly in love with her fiancé Joe Manganiello (of “True Blood“ fame) after a whirlwind six-month courtship that culminated in their engagement four months ago.

Howard and Robin joked that Sofia always gets engaged so quickly, but then makes the men wait to get married. “I am irresistible, what can I say?” Vergara teased.

Irresistible doesn’t even begin to explain it considering Sofia told Howard how Joe called her after only seeing a press release that she put out about her split with Nick Loeb.

“The body is still not cold,” she initially told the “Magic Mike” star at the time, though he didn’t seem to be put off in the least bit, pursuing her with phone calls until she agreed to meet him.

Fast-forward a few months and Vergara’s ring finger was adorned with a piece of jewelry she told Howard surpassed the $100,000 mark.

“He proposed to me in Spanish. He did really good. It wasn’t just like two words either; it was a whole thing,” she explained.

Howard fished for a preview of the upcoming wedding, which Sofia said would be in a “protected” location so that their celebrity guests could have a good time without worrying. “Everybody from ‘Modern Family’ is coming for sure. Reese Witherspoon better come,” she told him.

Early in the interview Sofia complained that people notice her breasts more than her ass. “I think it’s been underestimated, my ass,” she told Howard.

Howard agreed that in the age of Kim Kardashian and J.Lo, Sofia’s backside sometimes gets lost in the mix.

“It’s really annoying! I work hard for it,” she exclaimed. “Now that I’m getting older I work out. I think I deserve a little respect for my ass, too.”

As for her most pronounced assets, Sofia assured the staff that her chest is au natural – though she admitted that if she were born flat-chested, she would have done something to change it.

Nonetheless, Howard and Robin promised to help her out by spreading the word about her great ass.

3. Vergara Is Far More Than Just an Actress

Many years ago Sofia started an agency with her longtime manager Luis Balaguer called LatinWe to represent the talent in the Latin market – and she is reportedly very successful from it.

She realized that there was a big gap in resources. “There wasn’t really anyone representing the Latin talent in Univision or Telemundo. There was only for singers, not for television or for journalists.” Now she represents a significant portion of the talent pool.

4. She Had A Pretty Scary Childhood

​Though she seems to have it all now, the Colombia native actually had a pretty harrowing childhood with her brother getting kidnapped twice (and later killed) as a message to her father among other scary moments.

5. Her Ex Wants Her Frozen Embryos

Ex-fiancé Nick Loeb badly wants to be a father – but he wants to do it with Sofia’s frozen embryos. You can sympathize with the guy considering the genes at stake here, but as Sofia pointed out, that’s just crazy talk.

Luckily for her (and unluckily for him) though the former couple tried twice during their relationship to have a baby, they had a contract to stipulate exact wishes for the whole endeavor.

“If it was so serious for him, this issue, which I totally respect if it’s serious for someone, then you should have taken it more serious at the time like I did,” she fired off.

Though she said she isn’t upset with him, Sofia just wants to move on with her life.

“Hot Pursuit” will be out officially on May 8 and if the stories Vergara shared today are any indication, this won’t be one you should miss. Check out what she had to say about her upcoming movie (above) and check out the trailer for “Hot Pursuit” (below).