Jimmy Kimmel Sits in and Plays Eric the Actor Game 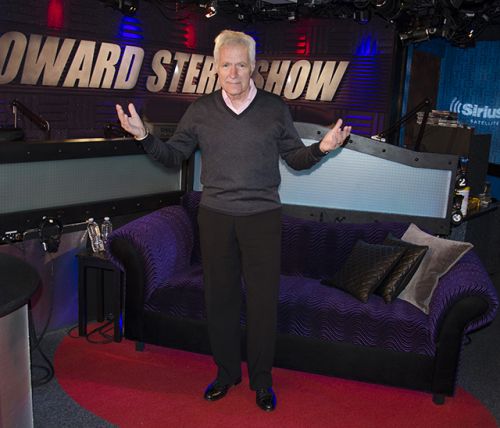 Howard sat down with “Jeopardy“ host Alex Trebek for the first time this morning in what turned out to be a wide-ranging discussion about the host’s past as well as some intriguing insight behind the scenes of the game show world.

Take a listen to some highlights below:

Reflecting on his rebellious years as a student, Trebek noted to Howard that he is a firm believer in second chances as he received one after being kicked out of school and ultimately turned out incredibly successful clearly. Yet in turn Howard pushed back on this idea even further, posing a tough question to Alex: “When you say you believe in second chances, do you think a guy like Brian Williams should get a second chance?”

Trebek was hesitant on this one noting that there was no doubt Williams lost the public trust. “[I]f there is one area that seems to be sacrosanct in terms of news, it is the early evening news on the three big networks. If the public loses confidence in you in that spot – he can host other shows – but to put him back in that one … I think it’s going to be a tough decision for the heads at NBC.”

Alex on the other hand was recently ranked the 8th most trust man, right behind Melinda Gates and directly in front of Bill Gates.

While Trebek may have once had ambitions of becoming the prime minister of Canada, Howard did end up unearthing some drug use under Trebek’s squeaky-clean exterior.

“I have smoked marijuana,” he told Howard. “I had terrible arthritis in my shoulders and a friend of mine said, ‘You should try marijuana; it’ll help get rid of the arthritis.’ It didn’t, and so I didn’t continue smoking.”

Sounds innocuous and medicinal, right? Nevertheless, with a little deeper digging Trebek recalled a bad run-in with some hash brownies – four or five to be exact.

“I went to this party at a home in Malibu and I didn’t know the people who were hosting the party and they had hash brownies. I love chocolate and I ate four or five hash brownies. The party was on a Friday night … I didn’t leave their home until Monday morning.”

He insisted that it was no exaggeration: “They put me to bed Friday night as I was almost comatose and I did not wake up Saturday, I started to wake up Sunday, and then I went home. Bad experience.”

Trebek further admitted to trying a little cocaine once after being introduced to it by his accountant at the time. Some accountant …

Later in the morning Alex recounted the story of blowing out his Achilles tendon chasing a “crazy woman” who broke into his hotel room and robbed him. Listen to how the normally soft-spoken Jeopardy host turned the tables on his assailant.

Howard remarked that he found it disconcerting when Alex shaved off his mustache and Jimmy Kimmel, who sat in on the show Monday, also agreed.

Trebek explained that he really just did it on a whim in between tapings one day much to his producer’s surprise – especially since he only shaved off half of it to begin with.

Initially though, many people in the audience didn’t even seem to realize what the game show host had done. Not even his family realized until he pointed it out – but the shock of it caused his 10-year-old son to cry.

“He’s transitioning!” Howard joked before telling Alex that he thought a lot of announcers who had mustaches didn’t perform as well because they seem worried about messing up how their facial hair looks.

Everyone agreed that Alex was one of the ones who could truly pull it off though.

There’s no doubt that it is tough to become famous in a format where the show is really the star, not the host. Even so, Alex Trebek has become synonymous with Jeopardy — but it wasn’t as easy a rise as it may seem at first glance. “There is no negotiating,” he recalled. “They just said, ‘This is what you’re getting.'”

To get around a low starting salary, Alex said he took the position as both host and producer right off the bat, convincing the network to pay him both salaries.

These days Trebek has three more years on his contract and works a total of about 46 days a year for somewhere in the ballpark of $10M annually.