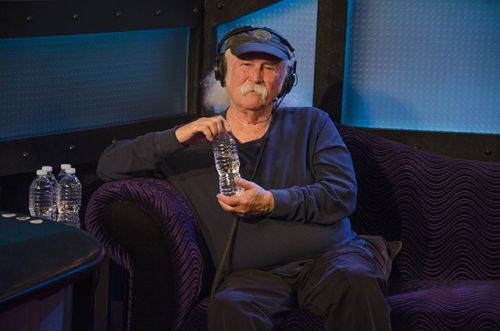 It’s no secret that Crosby, Stills, Nash, & (sometimes) Young is one of Howard’s favorite bands of all time. While all four band members have been in studio for an interview, until Monday singer David Crosby had only appeared on the show once, as a ‘mystery guest’ in the 1980s. The time for a proper, long-form interview with the rock legend long overdue, David opened up about his entire career—from his early Days, to the Byrds, to CSNY.

But first, the subject of David’s harsh words for Neil Young’s girlfriend Daryl Hannah in an interview came up—something the singer was remorseful about. “I’ll tell you the truth about that … I screwed up. I shot my mouth off when I shouldn’t have,” Crosby admitted. “I shouldn’t have done it and here’s the real reason why: I’m a screw-up. I have screwed up massively. Daryl Hannah never wound up at a Texas prison. I’m screwed up way worse than that girl. Where do I get off criticizing her?”

Rumors swirled back in November after a war of words erupted with Young announcing that CSNY would never tour together again. Graham Nash disagreed on the Ron & Fez show, telling them that Neil was “just a little upset” at the time of those comments.

Still, as the media speculated about Daryl Hannah’s involvement, both Crosby and Young were more or less mum on the specifics until now.

“I love Neil and I want him happy … I apologize, Daryl. If you’re out there, I had no right. I have nowhere to stand to look down and criticize you. I apologize. I should not have done that, it was completely out of line,” Crosby conceded.

Aside from his CSNY bandmates, David had another love affair (musical, and otherwise) with legendary singer-songwriter Joni Mitchell. In fact, Graham Nash heard David and their future bandmate Stephen Stills singing at Joni’s house one night and he started singing along—inadvertently igniting rock history.

Listen to David talk about how wonderful Joni was and describe the moment he knew he wanted Neil Young to join his band (below).

David also talked about being the biological father to Melissa Etheridge’s two children, something the rocker spoke proudly of when she was on the show recently. According to him, it all came to be when Melissa and then-partner Julie Cypher met his son, Django. “We were in Hawaii and they saw him and they said, ‘Damn, we want to have one like that. How do you get one like that?’” he recalled of the conversation. “And my wife pointed at me.”

And just like that, David Crosby completed the CSNY interview puzzle.

Be sure to check out David Crosby’s new album and catch Crosby Stills & Nash on tour.