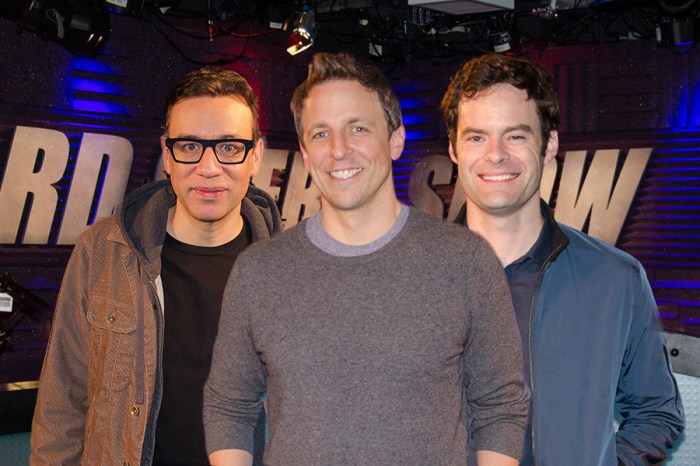 Seth Meyers, Bill Hader, and Fred Armisen came in to promote their new IFC series called “Documentary Now!,” but the real gems from the interview came from “SNL” memories and impressions of their fearless leader, Lorne Michaels, along with each other and even Ringo Starr.

The Birth Of “Documentary Now!”

Though “Documentary Now!” will air on IFC, its origins actually lie in an “SNL” skit called “The History of Punk,” which Seth, Bill, and Fred had created during their last season.

Afterward, Hader brought up the fact that doing these hyper-accurate documentaries would make for a funny TV show and they all agreed. “We could do a different documentary each show and make each one totally different,” Bill thought at the time.

Seth and Norm Bury The Hatchet

Howard asked Seth about the fallout from an incident earlier this year in which he asked Meyers after the SNL 40 special how he felt about Norm Macdonald revealing some behind-the-scenes info, specifically about Eddie Murphy’s bit. Seth had said at the time that he probably wouldn’t have done that.

Fast-forward a bit and Norm was on HuffPost Live where they caught him off guard with Seth’s comments to which he sarcastically replied: “If you really want to be really funny, then that’s what you want to do. You want to think, ‘What would make Seth Meyers laugh?’ That’s how I live my life.” He even went so far as to say he wouldn’t be doing Seth’s show.

Meyers told Howard that he reached out to Norm immediately after hearing it to clear things up and now they’re all good.

Lorne Michael Impressions All Around

Howard mused that he thought Lorne Michaels was grooming Seth to be his successor someday. Meyers brushed it off joking that Lorne “will outlive us all.”

The conversation then turned to who does the best Lorne impression, which they all agreed just kind of becomes an inevitability when working so closely with him. Listen above for their hilarious and different takes on the SNL creator.

Howard read that Seth has been texting his late night competitor James Corden to maintain a good relationship and avoid another Letterman – Leno scenario.

Seth said that he actually knew James before they were competitors, so it’s not like he started it out of nowhere. They just let each other know when the other one has a good bit or a good night.

Howard wondered whether James was being truthful with Seth or if he was trying to lead him astray.

While Bill, Fred, and Seth all traded stories of the awkward intricacies of interacting with Paul McCartney, they also recalled the classic story of Al Franken, who was one of the original SNL writers, trolling George Harrison really hard.

George Harrison was playing piano in an NBC common area and everyone came outside to listen of course. “Franken knew it was George Harrison, but Franken came out of his room and just yelled, ‘People are trying to work! Keep it down!'” George Harrison immediately stopped playing and left. Fred said that he thought Franken slammed the door too.