Steven Carell Opens Up to the King 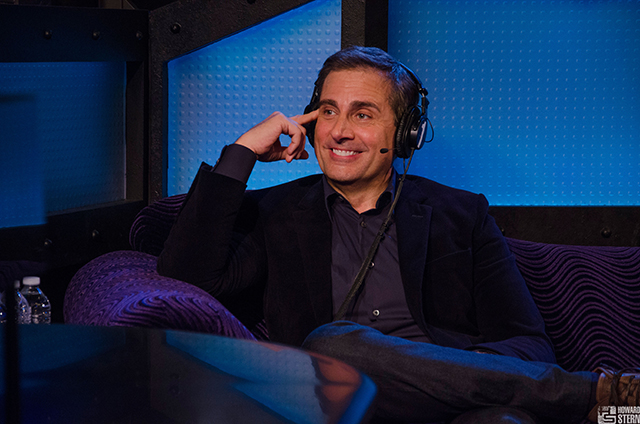 (Mostly) comedic actor and movie star Steve Carell stopped by to talk to Howard about his new movie Foxcatcher. Howard watched the film and loved every second of it – it was dark and scary and brilliant. He was so wrapped up in it that he didn’t even recognize Steve in the part. To be fair, Steve was wearing prosthetics.

In Foxcatcher, Steve plays John du Pont, a wealthy heir to the du Pont fortune who becomes obsessed with wrestlers (real wrestlers, not the Hanzi kind of wrestlers) and turns his estate into a training facility, hoping to coach a team to Olympic glory. John is a dark, twisted character and let’s just say things go awry. It turns out John is a sadistic, manipulative murderer. Oh, the whole story is true, too.

Steve had to sit for hours in the make-up chair so the prosthetics he wears in the film could be applied. He didn’t stay in character all day like a Daniel Day Lewis, but the character was so dark that he could sense the other actors not being comfortable around him.

Howard was blown away by his performance and he wasn’t the only one. 60 Minutes also recently did a glowing piece on Steve and the movie. They also got into Steve’s relationship with his wife (which is good) and the general store he owns (which is GREAT!).

Here are some other highlights from Howard’s interview with Steve:

As mentioned above, Steve owns a general store in Massachusetts. His sister-in-law actually does the day-to-day running on the store. Steve makes his money in show business, he’s just looking for the general store to break even.

Steve believes in God, but he isn’t necessarily deeply religious. He’s Catholic and he likes the new pope, but he feels that his beliefs grow and change as he ages.

Although he’s only 52 years old, Steve recently had a hip replacement due to a hockey injury.

Finally, Howard hoped that Steve would win the Oscar for his stunning work in Foxcatcher. Steve admitted that it would be cool for his parents to see him win an Oscar, but beyond that he didn’t seem too tied up in the Awards race. Still, like a few other Stern Show guests (Paul Giamatti, Bradley Cooper, Amy Poehler) Steve promised to thank Howard if he wins.

Keep your fingers crossed for Steve!