Comedy legend opens up to Howard about his childhood, his days on “Saturday Night Live,” and more 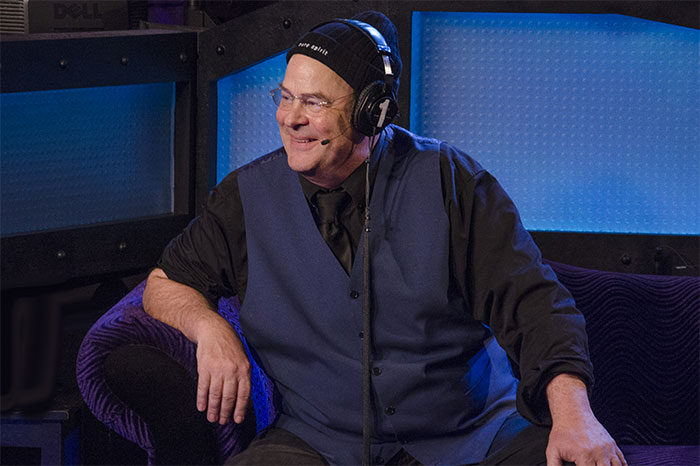 As unusual as it may be for someone winding up in comedy, Dan actually had a very happy childhood. He told Howard he briefly toyed with the idea of becoming a priest because his parents thought seminary school would offer him a better education, so he lied and pretend like it was something he was interested in. In seventh grade, however, Dan dressed up a pig like the pope and his parents were promptly informed their son wasn’t priest material.

After Dan’s priestly ambitions gave way to comedic ones, he was hired to work on “Saturday Night Live” where he earned $278 per week to write sketches but wasn’t paid a penny to perform. He eventually grew to resent this fact, telling Howard he once got so angry he kicked a hole in a 30 Rock wall.

Regardless of what went on behind the scenes, Dan was magical on screen. In fact, both Howard and Fred Norris agreed Dan was the number one cast member in the show’s history. They both loved his legendary Richard Nixon impression, he and Steve Martin’s “two wild and crazy guys” bit, and, naturally, the Coneheads.

“I never laughed harder in my life,” Howard told him.

Of course, Dan’s movie career wound up being just as prolific. He and his most famous partner-in-crime—the late great John Belushi—first hit the big screen together in their iconic 1980 film “The Blues Brothers.” Dan told Howard all about making the movie, saying the two of them really had to work hard to convince the Queen of Soul, Aretha Franklin, to get into that waitress outfit for her big diner scene.

While “The Blues Brothers” performed well Dan believes it would’ve done even better if it had been properly distributed – he told Howard some theaters refused to show the movie because it featured so many black cast members.

Belushi tragically died in 1982 while Dan and Harold Ramis were writing the script for their soon-to-be hit “Ghostbusters.” Dan told Howard he was literally in the middle of writing a line for John when he learned the news of his good friend’s passing. The movie still wound up getting made with Belushi’s part going to the great Bill Murray.

Dan and Bill shared the screen in both “Ghostbusters” and “Ghostbusters 2,” but on Tuesday Dan revealed it’s unlikely they will make any more movies together in the future.

“I don’t think we will ever work together again,” Dan told Howard. “I’ve written four scripts for him and it’s very tough to get him to read them.”

As for Paul Feig’s all-female “Ghostbusters” reboot, Dan said he’s happy the movie is on the way and that Paul’s script is quite funny.

Howard said he was confused by Eddie Murphy’s very short performance and Dan said he was unfazed but admitted he would have enjoyed watching Eddie do a little more on stage. “I would have loved it if he’d just gone off … he could’ve riffed on that audience and just ripped it,” Dan said. Listen to more of their conversation about “SNL 40” (below).

Other topics covered during Tuesday’s interview included Dan’s Crystal Head Vodka, made without all the additives found in lesser vodkas, and Dan’s beautiful wife Donna Dixon, who Howard learned was waiting for her husband in the green room.

Howard was excited to meet Donna, who famously starred on the show “Bosom Buddies.” She told Howard she was dating Paul Stanley of KISS when she first met Dan, who as it turned out was dating “Star Wars” icon Carrie Fisher. Neither relationship worked out, of course, and it wasn’t long before Dan and Donna found themselves married with three lovely children.

The interview concluded with Dan sharing some kind words for Howard, telling him how happy he was to be finally sitting across from the King of All Media and how much he appreciates what Howard does for his listeners every day.