"I don't like when I'm out in public and people start yelling at me to dance," the comedian tells Howard 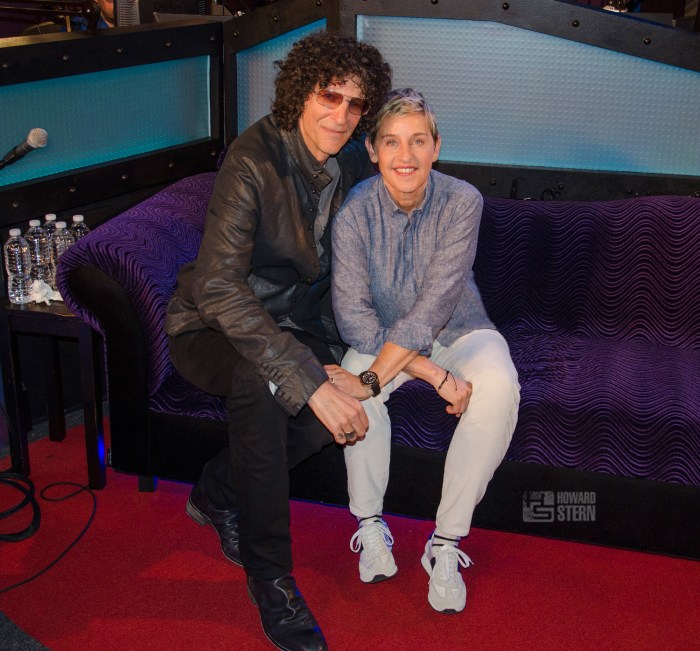 Ellen DeGeneres made her very first appearance on the Stern Show this morning, ahead of the 13th season of “The Ellen DeGeneres Show.” Howard and Ellen spent nearly an hour together in a fascinating look at her career and life. Check out some highlights from their interview (below).

At First, It Was Difficult

While Ellen may be on top of the daytime television world now, that same world was not always so accepting of her back in the day.

The host and comedian remembered when they couldn’t even sell the show in the beginning. She was forced to perform stand-up so the network executives could be persuaded that “women at home with kids would watch a lesbian on TV.”

Moreover, Ellen said she was recently reminded of when she had to film fake test interviews with people like Alanis Morissette and Tom Hanks at her home to prove “a lesbian would have some kind of thing in common with straight people.”

Howard was appalled that as a seasoned entertainer, she was forced to do that.

Ellen Can’t Stop Dancing … Even If She Wants To

If nothing else, we learned there is at least one guaranteed way for you to annoy Ellen. “I don’t like when I’m out in public and people start yelling at me to dance like I’m a monkey,” she said.

She does love dancing, though, and it has of course become a staple of her image, almost taking on a life of its own.

“You’re trapped. You have to keep the dance going,” Howard agreed.

“At some point, I’m not going to retire because I want to. It’s because I can’t dance anymore … because I have a broken hip or something,” Ellen joked.

One guest that would not dance with Ellen on her talk show was Caitlyn Jenner.

“I don’t think she’s a dancer,” Ellen said with a laugh. “And maybe she didn’t want to dance with me because I’m a lesbian.”

Though DeGeneres said her interview with Caitlyn went well, she still struggles to understand how the transgender former Olympian could still hold some of her conservative viewpoints, including previous statements she’s made about not being in favor of gay marriage.

A Phone Call to God

Anyone who has heard the iconic stand-up bit that cleared the way for Ellen to become the first female comedian to be invited to sit on Johnny Carson’s couch can attest to its hilarity, but you may not have heard the heart-wrenching backstory.

The joke originates from one of Ellen’s first girlfriends who would cheat on her constantly. Ellen wanted to teach her a lesson and ignored her at a club one night, only to find out later that she had died in the car wreck that Ellen saw on her way home, not even realizing it. The incident caused her to ponder why things like fleas get to survive but this young woman had to die and subsequently what it would be like if she was able to call God directly.

Initially, the joke was a huge hit. But after writing it, Ellen said she just knew it would be the one.

“When I finished writing it, I literally was on that mattress on the floor in that apartment with no money and had just lost my girlfriend and I thought, ‘I’m going to do this on Johnny Carson and he’s going to call me over and I’m going to be the first woman in the history of the show to sit down on that couch.'” And that’s exactly what happened a few years later.

Check out the video (below) of Ellen telling Howard she doesn’t read the tabloids but winds up in them all the time.