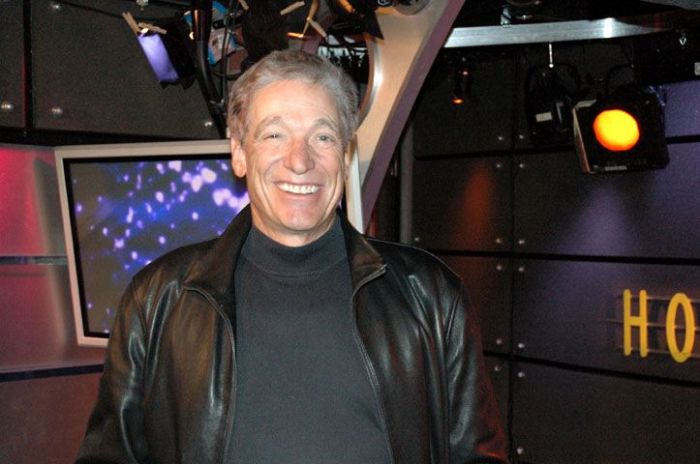 Talk show host and longtime friend of the show Maury Povich returns to the Stern studio Monday morning to discuss the 3,000th episode of his self-titled daytime talker “Maury.”

Maury’s first appearance on the show dates back more than 25 years and he’s since returned numerous times.

Here are some of the highlights from Maury’s previous studio visits:

YOU ARE NOT THE FATHER!

During the first day of television’s sweeps week in 1991, Povich came by to plug his talk-show “Maury” that was still in its infant stages of television lore.

Much like today, a guest needed some thick skin to enter the figurative lion’s den that was Howard’s studio. Once Maury arrived, it didn’t take long for Howard to make the daytime host squirm by mentioning Maury’s current pregnancy struggles with his second wife, journalist and TV personality Connie Chung.

Maury had admitted that he and his famous wife had been trying to conceive a child for quite some time but weren’t having any luck.

Maury assured Howard that on paper nothing was wrong but that age might be a factor in their struggles. “If Connie had some advice for women who wait, it’s don’t wait,” Maury told Howard.

Maury continued, explaining how his wife put off starting a family because of the high demands of her broadcasting career: “You’re talking about a woman who started in an all-boys network 20 years ago or so, [and] had to work twice as hard as the guys did.”

Howard agreed and was quick to point out that Connie was a dynamo in her field, so at least all her efforts had paid off professionally.

Maury and Connie weren’t able to conceive a child naturally, so they happily adopted a son in 1995.

During the same 1991 interview, Robin recalled the time Maury’s wife caught on fire and had to be saved by former astronaut John Glenn.

“This is amazing,” Maury exclaimed to Howard, telling him that while Connie was interviewing Glenn in 1984, a portable microphone strapped on her body began to smoke. A few seconds later, Glenn sprang into action and put the fire out before it got out of control.

“She didn’t even know she was on fire and smoke was rising from behind Connie’s head,” Robin said. “I happen to remember that.”

“It was hilarious,” Maury added.

It’s unclear who the breadwinner is between Maury and Connie nowadays but during a 2005 interview, he was quick to acknowledge that it was definitely his wife who used to bring home the bigger paycheck.

Maury recalled commuting to work from New York to DC during the mid-80s and when he’d arrive at their New York apartment, the doorman would say, “Who are you here to see?” to which he’d reply, “I’m here to see my wife!”

During a 2005 interview, Howard rattled off the very long list of daytime talk shows that Maury has outlasted. From Donahue to Sally Jessy to Ricki Lake to Montel – they all eventually went away.

So, what’s Maury’s secret to daytime success? “I’m searching for the daddies of every baby in this country,” he told Howard.

To further prove how embedded Maury’s show is in our daily lexicon, Maury told Howard about a friend of his who overheard two caddies discussing whether or not they were ever accused of being someone’s father, to which one caddie replied, “All the time…but I ain’t the daddy ’til Maury tells me I’m the daddy.”

Tune in to the Stern Show on Monday to hear more from Maury Povich.