O.A.R. Dedicates a Song to Bobo

Memet Walker’s Instagram Is Turning Him Into a Gay Icon 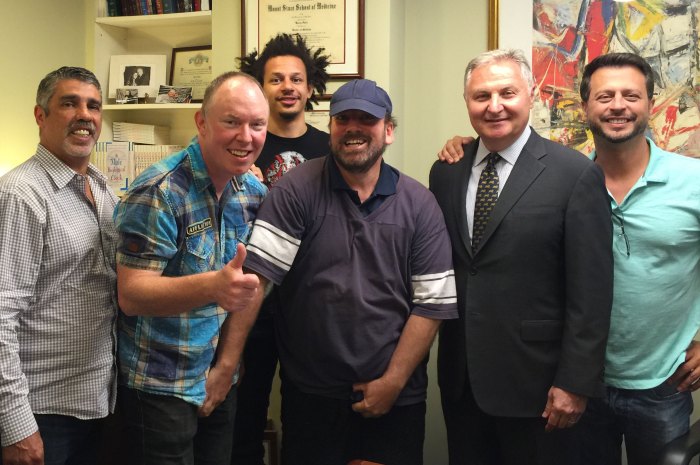 The fine line between pleasure and pain was crossed several times on Tuesday morning’s Stern Show. The always daring Eric André returned to visit with Howard and try out a new bit he dreamt up called Prostate Karaoke.

In case that name isn’t self-explanatory enough, Eric wanted to sing karaoke while having his prostate examined live on the air.

“I’m going to have a prolapsed anus by the end of this,” Eric told Howard when he first arrived in the studio. Dr. Harry Fisch was willing to put his medical degree to good use and provide a prostate exam for Eric and anyone else who wanted to be put to the test. Sal Governale and Richard Christy were of course willing to participate and Eric was also able to rope Benjy Bronk into the bit. The foursome piled into a car and headed up to Dr. Fisch’s offices while Howard and Robin got started with the news.

One might think a prostate exam is done by having a doctor stick their finger in a patient’s rectum, but Dr. Harry Fisch told Howard that he would be using a large probe to check the guys. 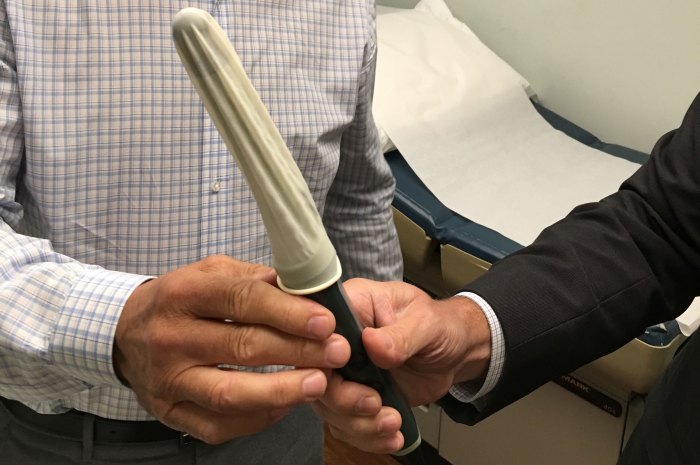 “The finger only can detect about 20 percent of the prostate,” Dr. Fisch explained, “The ultrasound probe sees the entire prostate so, for a complete evaluation, that’s what we do.”

He also assured Howard that this procedure is “not painful.” But once things got going, the guys certainly didn’t agree with that.

Richard was brave enough to go first and tried to get completely naked before Dr. Fisch told him he could keep his shirt on during the exam. He started singing his song, “Unchained Melody” by the Righteous Brothers, and as soon as the probe entered him, his voice noticeably cracked.

Gary Dell’Abate was reporting live from the scene and exclaimed, “It’s way in.” 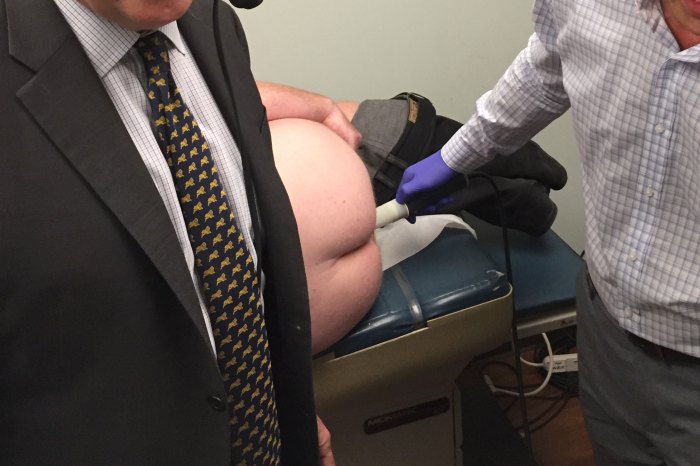 After his exam was finished, Richard described the procedure as feeling “like a penis in my butt.” Dr. Fisch told Richard that his prostate was normal, weighing about 20 grams.

Sal was the second singer to drop his pants and bend over. Gary described that Sal was “massaging his butthole” before Dr. Fisch began the exam. Sal explained he was simply loosening himself up before the probing. 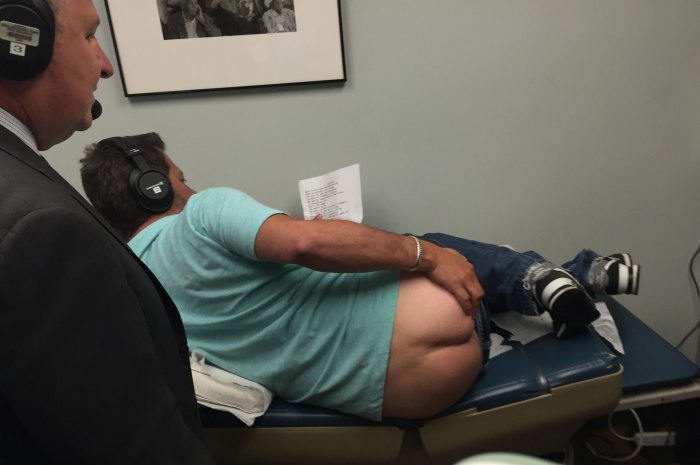 His song choice was “The Wonder of You” by Elvis Presley, a song he once danced with his mother to at his wedding. He managed to keep singing throughout his exam and got rave reviews afterwards from Dr. Fisch.

“He’s got a great prostate,” Dr. Fisch said of Sal, adding that his prostate was only 19 grams. “Bladder is perfect.””It’s an indescribable feeling,” Sal told Howard. “It’s not good. It’s very odd. The only way to understand it is to do it.”

However, it wasn’t easy getting the probe inside of Benjy at first. Dr. Fisch suspected that Benjy was squeezing so tightly that it was difficult to actually penetrate him. But once he got the probe inside, the findings were not great – his prostate weighed in at 34 grams.

“He’s healthy but he’s got to be careful,” Dr. Fisch said, explaining that people who are overweight tend to have heavier prostates.

Last but certainly not least was Eric André who chose Seal’s “Kiss From a Rose” for his karaoke song.

“Why am I doing this? Fuck,” Eric said while preparing for the prostate exam. With his music going and the probe inside of him, Eric suddenly felt the urge to shit.

“I have to shit, I have to shit! Shit’s gonna come out!” he yelled. Despite experiencing that sensation, Eric did not end up shitting during his exam. Howard wondered if the probe was that far inside of him.

With the probe safely removed, Dr. Fisch gave Eric his results: a clean bill of health and a 19.5 gram prostate. After Eric was done trying to wipe his ass lube onto a retching Richard Christy, it was time for Howard, Robin, and Fred to share their scores. The unanimous winner was Sal.

“He sounded like Elvis with a finger in his ass,” Fred said of Sal’s Prostate Karaoke performance. Richard took second place, Eric third, and Benjy’s scores earned him last place.

Prostate Karaoke ranks up there as one of the wildest things Eric has ever done, which is saying something, considering this is the guy who recently dropped trou and tried to take a shit on his desk while interviewing “Grey’s Anatomy” star Jesse Williams.

“He was kind of playing into it too much and I looked at Hannibal [Burress] and I looked at my director and I was like, ‘I should just take a shit on the desk'” Eric told Howard earlier in the morning. He elaborated that since he had just gone to the bathroom before the interview started, he was unable to get any poop out on the desk, but was just happy to make Williams watch his asshole “turn from an innie to an outie.”

Howard also revealed to his audience that there were bits besides Prostate Karaoke that Eric pitched to the Stern Show: Ice Water Karaoke, which involved singing while dipping your balls in cold water, and an Ex-Lax Sybian ride, which was deemed too much of a mess risk.

“The Eric Andre Show” airs Fridays at midnight ET on Adult Swim. For ticket and tour information for Eric’s live appearances, go to www.ericandre.com/gigs. To learn more about Dr. Harry Fisch and the importance of prostate health, click here.