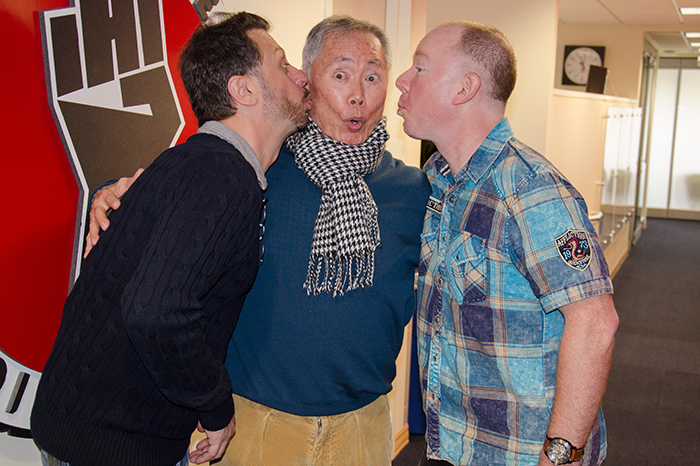 George Takei, the official announcer of the Howard Stern Show, arrived in the studio Monday morning to witness the looming lie detector tests which would be used to determine if Richard Christy and Sal Governale are gay or straight.

Even though he’s closing in on 80 years of age, George was looking better than ever and told Howard that he is still performing 100 pushups, 50 sit-ups, and a 30-minute walk each day.

“Is it possible Brad’s semen is the fountain of youth?” Howard jokingly wondered.

A couple of months ago when fellow “Star Trek” alum William Shatner was on the Wrap Up Show, he claimed to not really know Takei despite working with him and doesn’t understand why George continues to feud with him in the media, ending his message with an emphatic: “Fuck off!”

Monday morning George responded to the comments and gave his side of the story. The “Sulu” actor reiterated that Shatner knows exactly who he is and told Howard that the so-called feud goes back to a few instances. “When I wrote my autobiography, I called it as it was,” he explained, and Shatner may not have been happy with his portrayal in all of the stories.

Additionally, despite the fact that Takei says he and Brad invited Shatner to their wedding and he simply never RSVP’d, he made a “fuss” in the media about not being invited.

George told Howard that he believes the whole thing was simply promotion for Shatner’s “Raw Nerve,” which was coming out at the time. “Since then, he’s been delivering a steady stream of criticisms about me,” George said.​

George’s Broadway musical “Allegiance” is headed to the big screen for one night only, Dec. 13. For tickets and theater locations, click here.