The Coldplay frontman discussed it all with Howard on Wednesday 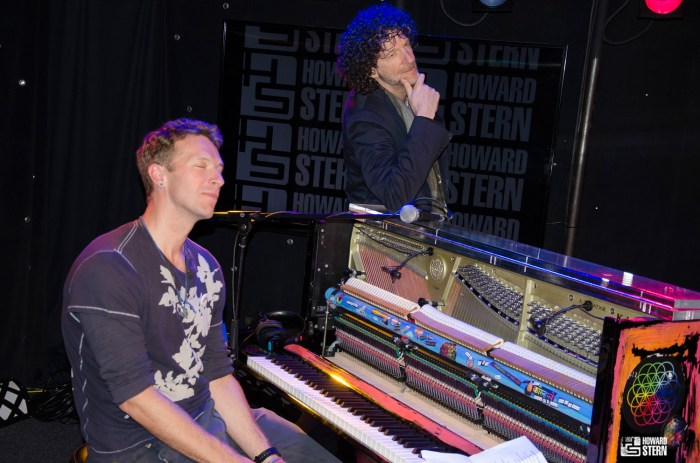 Coldplay frontman Chris Martin was in-studio Wednesday to promote Coldplay’s new album, “A Head Full of Dreams.” Along the way, Chris chatted with Howard about his early career, headlining the Super Bowl 50 halftime show, getting rejected by David Bowie, and even regaled Howard and Robin with some live in-studio performances.

Here are some highlights from Chris’s interview with Howard.

Before Coldplay There Was…The Rockin’ Honkeys?

Chris has been playing with his Coldplay bandmates since he was a teenager, but obviously there was life before “Coldplay.” Chris told Howard about the first band he was ever in.

“There was a guy in the year above us at school who was super into James Brown and Otis Redding, Wilson Pickett, everyone like that, and he said ‘I’m making a band. It’s called the Rockin’ Honkeys. You’re on piano.’ I was like, ‘great!'” Chris continued, “Three years later I was like, ‘what’s a honkey?’ We’re from the west of England – farmland!”

While the Rockin’ Honkeys didn’t skyrocket to stardom, Chris highlighted why it was an invaluable experience.

“It was an amazing lesson in bands, because this guy – I was 14, he was 15 – but he was a pro. So we would be rehearsing … and he’d been reading about James Brown, so he would treat us like that, he would shout at us,” Chris remembered. “One time we were rehearsing ‘Mustang Sally’ or something, and he stopped us and said, ‘you’re the biggest bunch of amateurs I’ve ever worked with!'”

Needless to say, Chris doesn’t use that method with his other band. 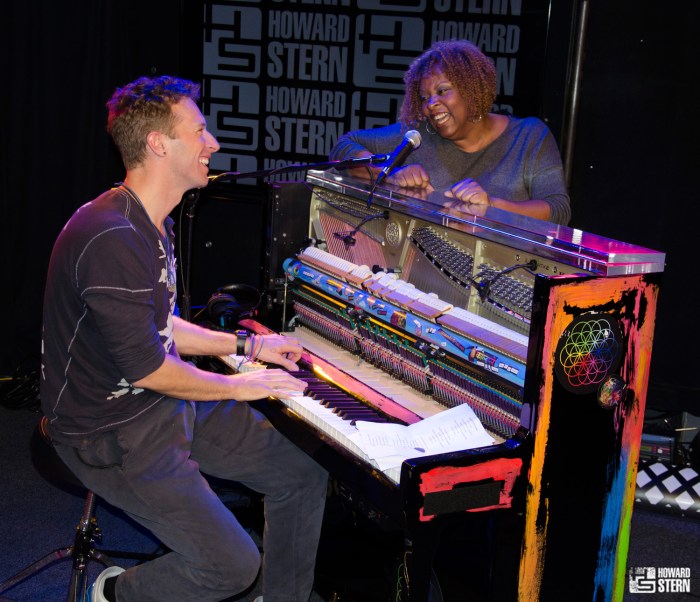 Howard asked Chris about rumors that “A Head Full of Dreams” might be the last Coldplay album and the band’s singer said: “Yeah … maybe we’ve finished,” before becoming a bit more ambiguous. “I don’t know. Who knows? Who knows anything? I don’t know what we’re doing tomorrow,” he said

“The reason why bands are good is because of their unique chemistry, I think,” Chris continued. “None of us are virtuosos, none of us are going to be great solo artists.”

So why would this be the last Coldplay album? “That’s just the way I’m trying to live at the moment — to just live right in the moment, and not plan three years ahead,” he told Howard

Only time will tell …

A Rejection From Ziggy Stardust

About ten years ago, Chris pitched a song for the late, great David Bowie, and told Howard how that came to be.”I’d just had surgery and I was on pills, and I dreamt this song, this weird song, and I woke up and wrote it down and everything, and [Bowie] was in the song,” Chris explained.

Chris got in touch with Bowie through producer Brian Eno, who was really close with the late legend. “I said ‘look, I have this weird song, you’re in it. Do you want to hear it?'” the Coldplay frontman told Howard. But after playing the tune for him, Bowie told Chris: “It’s not one of your best.”

Howard asked Chris if the rejection bummed him out, but Martin explained that “it was wonderful, because a) [Bowie] was right, it was terrible, and b) it was just a nice chance to hang out with him, so I wasn’t really bothered about the song.”

Howard wondered what Chris’ favorite Bowie song was and Chris revealed it was “Life On Mars?” “I was listening to it recently, and I was like that is the most beautifully written song, and it’s also got this effortless grace to it that the best songs have, but combined with such technique,” he added.

Chris proceeded to play a live version of “Life On Mars?” which you can hear above.

When it came to Coldplay’s 2008 hit “Viva La Vida,” Howard was very curious as to how the song came about.

“That just came out in sort of one go.” started Chris. “We were on tour in Mexico City and there’s a painter called Frida Kahlo, and where she used to live is a museum called the Casa Azul. I went to look at it and in there is a painting called the Viva La Vida, which is just written on a watermelon, and I thought ‘that’s a great title.'”

Chris quickly jotted it down. “I have a list of titles all the time … in my phone,” he told Howard.

After the title was in the bag, the wait was on to match it with the perfect music and lyrics. Chris explained: “So I had a title, then you start to get a feeling, then you just wait and wait and wait. See what happens. Then there’s about eight other songs I tried to call ‘Viva La Vida’ that just never made it. Then the real one came through and you go ‘that’s the one.'”

The Story Behind the Super Bowl 50 Halftime Show 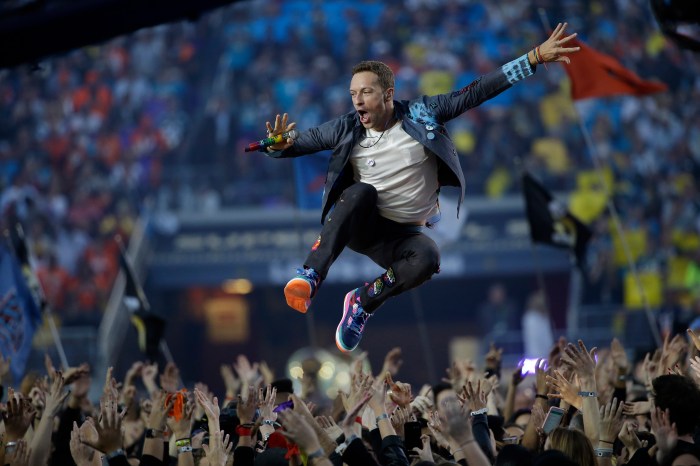 Howard also asked about the backstory to Coldplay’s Halftime show at Super Bowl 50, so Chris recounted how it all came about.

Martin said he thought they were originally supposed to be asked for next year since they wondered how one band could do Super Bowl 50. The show was ultimately offered to them — but they were told it would be in the daylight, which they thought would be “really difficult.”

It was some “big picture” thinking that convinced Chris that the show would be a good decision. “Once I let go of the idea of it being about us or our band or trying to promote our band or something, I thought, ‘well, you know what we can do is … make something that just shows loads of people getting along together,'” he said. “That’s really the basic principle, so it’s sort of inconsequential what Coldplay songs we played. It was more about ‘can we have this person here and that person there?'”

Soon, Bruno Mars and Beyonce were brought into the mix. “Because it was the fiftieth year, we wanted to make it larger than just being about one band, Chris explained. “Also, I felt like they can do things we just can’t do, and it was great to ask them to come and do that, amazingly. And they did.”

Howard asked Chris what those things Coldplay couldn’t do were. “Dancing,” Chris deadpanned. “Exactly what I can’t do.”

And speaking of Beyonce’s somewhat-controversial performance of “Formation, Chris told Howard that he though the performance “was about female strength.” Chris added that “you can read anything into anything these days.”

In preparation for the big game, Chris also revealed that he called halftime show vet Bruce Springsteen for some advice. “He was saying ‘you can’t dance … so you’ve got to have lots of people around.'” Chris said that Bruce’s advice was ultimately more on the spiritual end. “It gave me the confidence to do it,” he concluded.