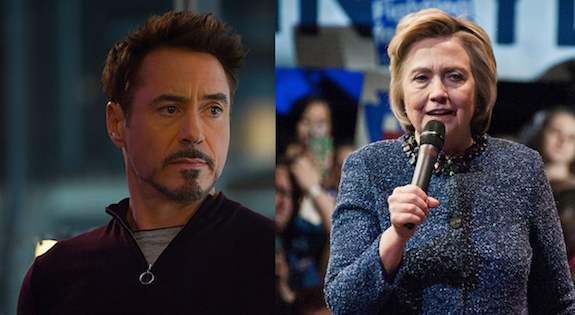 The 2016 Presidential race has been a tumultuous saga worthy of the Marvel universe, so it’s only natural that Iron Man himself should weigh in on the situation. On Wednesday morning, Robert Downey Jr. revealed to Howard who his superhero character would vote for.

“I believe Tony [Stark], being a budding feminist, he would say it’s time to have some feminine energy in the White House,” Robert told Howard.

Howard then confirmed that the candidate Iron Man backs is Hillary Clinton. “He does,” Robert answered.

As for Robert’s personal political leanings, he said he avoids talking politics “one million percent.”

Howard then speculated that Captain America (the fictitious comic book character, not Chris Evans) would probably cast his vote for Ted Cruz.

“If you go along with his points of view in the movie, he would back up whoever was for accountability,” Robert responded. “It’s a great year, I tell you.”

Either way, it’s official – Tony Stark for Hillary Clinton in 2016!