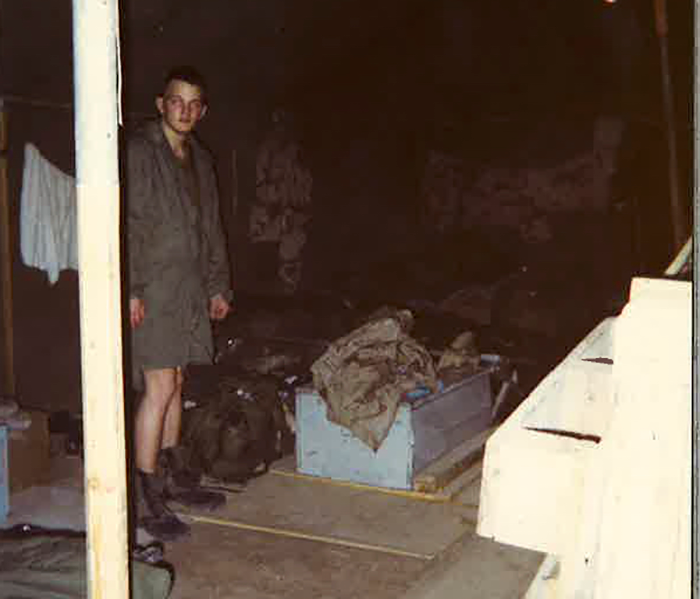 Brent Hatley in the his Marine days Photo: The Howard Stern Show

A new story surfaced about the sexual exploits of Stern Show staffer Brent Hatley during his time as a 20-year-old Marine stationed in Japan and Tuesday morning Howard invited him into the studio to detail his wild experiences.

Brent revealed that he was taken by older Marines to an Okinawa club known as Naha Music, or colloquially “The Stage,” where patrons were given the opportunity to have sex with the women—mostly of South American descent—onstage in front of the whole crowd. According to Brent, the women would strip down and whoever wanted to participate would come to the stage to roll a die. Whichever man got the highest roll then got to join the performer onstage to do the deed, all in full view of the crowd who would cheer them on.

“I went there six times; I was five for six. The first time I went there I couldn’t quite perform,” Brent admitted.

Howard and Robin were a bit shocked wondering if this was a fantasy of the veteran radio producer. While Brent maintained otherwise, it also wasn’t necessarily the wildest thing he’s ever done with his clothes off.

Nowadays Brent has more defined sexual limits. “In 2011 and 2012 I went to some serious therapy to get down to what was really going on with me,” he told Howard. “I’ve pulled it way back. Now I’m just exclusively with my wife.”