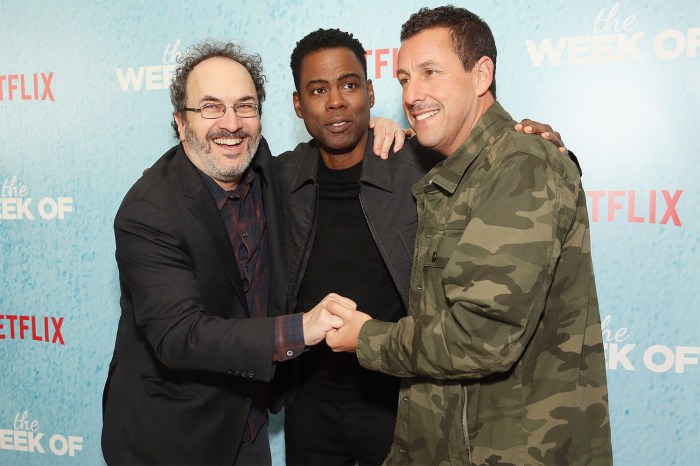 Writer, director, comedian, puppeteer, cartoonist, and frequent Stern Show guest Robert Smigel joined the Wrap Up Show on Wednesday and opened up about Ronnie Mund’s role in his upcoming Netflix comedy “The Week Of.”

“This is a rocket to stardom for Ronnie,” Smigel joked to Wrap Up Show co-host Jon Hein.

Directed by Smigel, “The Week Of” stars Chris Rock and Adam Sandler as two fathers who butt heads in the days leading up to their children’s wedding. While not integral to the storyline, Ronnie has a small part playing himself in the film. He appears in a funeral scene and utters precisely one line, according to fellow Stern Show staffer Shuli Egar, who accompanied him last year to the set of the shoot.

On Wednesday’s Wrap Up Show, Jon asked Robert if he considered Ronnie to be a featured player in his film.

“No, [the role is] not that good.” Smigel laughed. “I would say an unfeatured player.”

While Ronnie’s screen time may be short, Robert said his overall presence looms larger than his Stern Show colleagues may have previously realized. “He’s actually referenced in the movie several times before you see him,” Smigel said.

Robert went on to explain that his reason for including Ronnie in “The Week Of” had less to do with any bump in publicity the film might get from theoretically being discussed on the Stern Show, and more to do with it just being a natural fit with the characters and the setting. “The movie takes place in Long Island, so it’s got other references you would imagine Long Islanders would [make],” Robert told Jon. “Tons of Long Island references.”

“I just loved the idea of perpetuating that anybody associated with Howard can be a god in Long Island,” he continued. “So, Ronnie is like a celebrity in the movie … and then you finally get to see him.”

Other than prepping Ronnie for a specific joke, Robert admitted he didn’t get to spend much time with Howard’s driver during his day on set. But that doesn’t mean Ronnie hasn’t been on Smigel’s mind. As he told Jon on Wednesday, Robert actually told a Ronnie-related joke recently when introducing the movie.

“So, I get up there and I talk about the producers and the great crew they gave me, and then I start talking about the cast, and I say, ‘You can only imagine what an honor it was to work with these legends: Sandler, Rock, [Rachel] Dratch, [Steve] Buscemi, Mund,” Robert told Jon.

“I figured at least there will be 10 people from Stern here who will find this funny,” he continued. “Nobody knew what the fuck I was talking about.”

“The Week Of” premieres Friday, April 27 on Netflix. Watch the trailer for the comedy (below).