Ronnie Mund put his automobile knowledge to the test on Wednesday, facing off in the studio against a Stern Show fan and self-professed car expert named Mike in a new game called Beat the Limo Driver. Their rivalry began a few months back after Mike called into the show to take issue with Ronnie’s description of a Dodge Challenger SRT Hellcat.

“You were quite feisty,” Howard recalled on Wednesday. “You said Ronnie didn’t know shit about cars, right?”

“I just had to set him straight,” Mike said.

“I never said I was an expert,” Ronnie countered, hoping to temper expectations for the game. 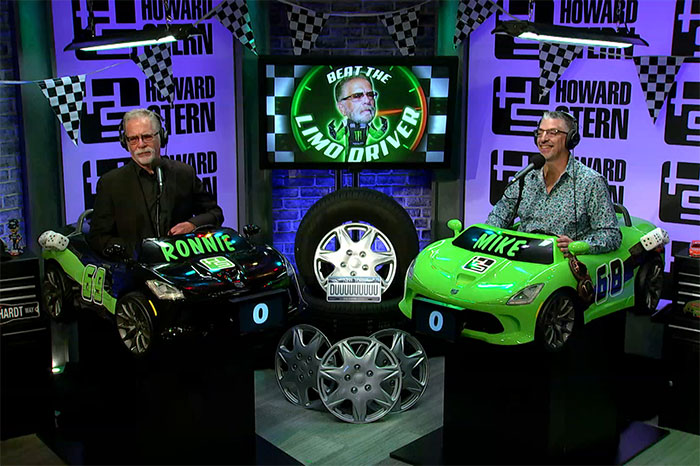 The rules were simple—Howard asks each contestant a question: a right answer scores a point while a wrong answer gives the opponent the chance to steal. Staffer Jon Hein would be the judge and have the final say. The person with the most points at the end of the game wins $500, courtesy of Dodge.

“Isn’t this exciting?” Howard said before kicking things off.

What Does ‘NASCAR’ Stand For?

Mike then guessed “National Association of Stock Automobile Racing.” He, too, was wrong.

Fred Norris’s Ronnie Puppet offered its own vulgar guess as well, but the answer was in fact “National Association for Stock Car Automobile Racing.” Neither side earned a point.

What Does the ‘T/A’ Stand for in the Dodge Challenger T/A Series?

Mike didn’t hesitate in answering the next question. “Trans automotive,” he said.

Jon said Mike was right, so Howard awarded him the game’s first point.

Ronnie, however, took issue with the ruling. “It’s track attack. Track attack. I own one!” he argued unsuccessfully.

Your Car Thermostat Controls the Temperature of What Specific Fluid?

Ronnie confidently answered “antifreeze,” which was correct. That tied the game at 1-1, but for some reason it didn’t stop Ronnie from raising his voice.

“You got one right, why are you so fucking angry?” Howard asked.

What Does the ‘Coin Test’ Measure the Condition Of?

Mike knew this one, too. “It measures the depth of tire tread,” he answered, taking a 2-1 lead.

What Does ‘SRT’ Stand For?

He was close, as the answer is in fact street and racing technology. Jon gave him some grief for mixing up the order of the words, but ultimately awarded Ronnie the point.

What Does ‘GTO’ Stand For?

The next question was tough for both contestants. Mike went first, guessing “GTO” stood for “Gran Turismo Operation.”

“I can’t accept that, I’m sorry,” Howard told him before turning the question over to Ronnie.

Ronnie didn’t fare any better. “Gran Turismo … I don’t know, it’s got me stumped,” he admitted. 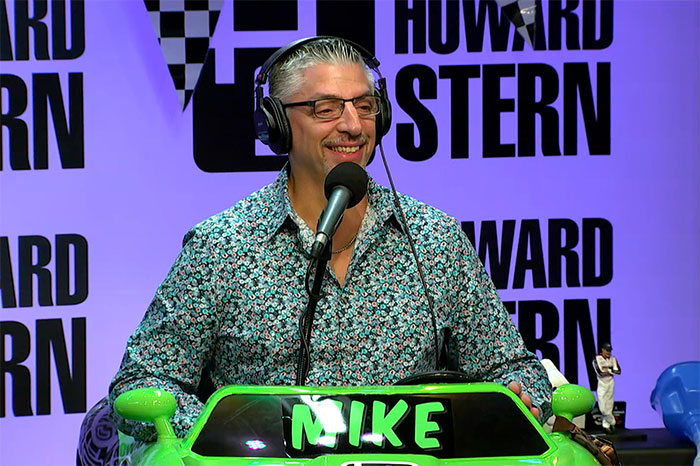 Howard informed them the “O” actually stood for “Omologato” before Ronnie revealed he probably should’ve known the answer because he once endured a terrible experience in a Pontiac GTO. “I went through the windshield on one,” Ronnie revealed, explaining the accident happened while he was a passenger in his friend’s new car.

Which Dodge Was the Sister of the Plymouth Roadrunner?

The next question was another toughie. “The GTX,” Ronnie guessed, incorrectly.

Mike didn’t know the Plymouth Roadrunner’s sister car either, so the score remained tied at 2-2.

What Was the Logo on the Dodge Duster?

Mike had an elaborate guess when asked about the logo of the Dodge Duster. “It was a spinning, like, uh, it looked like a hay spinning twister—it was like a twister look,” he told Howard.

“A tornado,” Howard clarified, awarding Mike a point. “We have a change in the score. Mike has moved into the lead, 3-2.”

“I’m excited now, Ronnie. I’m excited,” Mike joked as they prepared to enter the fifth and final round.

“Your windshield is fogging up,” Ronnie laughed, adding “I should’ve wore my racing suit, maybe then I would’ve known more.

What Is the Name of the Specific Type of Hood Where the Air Scoops Stick Out of the Top Through a Hole?

Ronnie needed to get his last question right to have any chance at tying the score, so Howard asked it twice, just to make sure his limo driver heard it correctly.

“I’m sorry,” Jon said when Howard asked him if that was right. “No.”

Mike didn’t shy away from going for the steal. “I think I might have you on this one. I think it’s called a shaker,” he said, answering correctly and extending his lead to 4-2. “That’s pretty easy,” he added.

Though the game was now out of reach for Ronnie, Howard still gave Mike his last question about where superchargers get their power. “I think it takes it from the air intake coming into the engine,” Mike said.

Ronnie offered a longer guess. “Well, I know when—a supercharger you have to install on to the motor, so it’s gotta be some kind of a, hmm, some kind of a motor that mixes the air and whatever. I don’t know.”

“Can I accept ‘Some kind of motor that mixes the air and whatever?’” Howard asked Jon with a laugh. He couldn’t, of course—the answer was in fact the crankshaft.

With both contestants getting it wrong, Mike won the game 4-2.

But not everyone in the studio was impressed with the contestants’ performances. “Nobody’s an expert it seems, Howard,” Robin said.

“I never fucking said I was an expert,” Ronnie insisted. “[Mike] said he was a fucking expert. That’s how we got in here.”

In addition to winning bragging rights over Howard’s limo driver, Robin told Mike he was also walking away with a $500 prize, courtesy of Dodge.