Wack Packer also reveals she came down with COVID-19 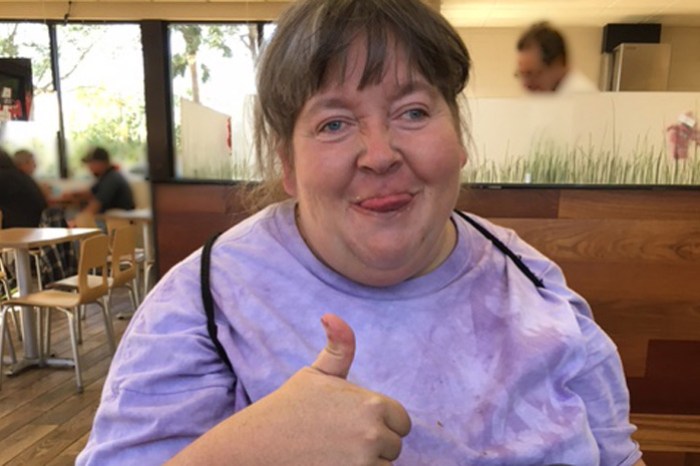 Wendy the Slow Adult called into the show Tuesday morning to chat with Howard, co-host Robin Quivers, and Stern Show correspondent Wolfie for the first time in quite a while. The beloved Wack Packer was eager to promote an upcoming Four Loko and Doritos dust-fueled internet broadcast, but first she offered up a health update, revealing she and her mother had recently come down with a relatively mild case of COVID-19.

“We weren’t really sick,” she told Howard. “We just had sore throats … [and] diarrhea.”

“Yes,” the Wack Packer responded. “It came out green.”

While Wendy still hasn’t received a vaccination, that hasn’t stopped her from living a full life. In recent months she’s traveled to visit with friends and purchase a Chucky doll, taken to live streaming, and even started hawking Wendy the Slow Adult-themed merchandise ranging from coffee mugs to clothing. “I have a t-shirt for kids with me on it,” she said, explaining the apparel is available up to size 5XL.

As for her upcoming YouTube live stream, the Wack Packer was committed to broadcasting for 24-hours straight.

“I’m going to be doing some karaoke, chilling, talking to a bunch of my friends and bands and entertaining them, and then we’ll probably have a couple of people fighting on the show … where they yell at each other,” Wendy said, adding that she was hopeful to get some celebrity cameos from Freddy Krueger actor Robert Englund and Stern Show celebrity superfan Jimmy Kimmel.

“Why are people doing this to you?” Howard asked.

“They probably don’t want me to be number one on YouTube. That’s the only reason,” she said, explaining that after someone flashes the cameras, she then needs to end the show to avoid getting in trouble.

However, Wolfie recalled one instance where Wendy gave a man permission to expose himself on the air.

“I accidentally said yes,” the Wack Packer said. “I don’t think before I answer.”

If all goes according to plan, Wendy’s 24-hour broadcast will see her gumming the flavoring off Doritos—as the Wack Packer has apparently lost all her teeth—and drinking multiple cans of the potent alcoholic beverage Four Loko. Considering what alcohol consumption has done to her in the past, Howard and company worried Four Loko might lead to the Wack Packer having an accident in her pants.

“I’ve got a potty in my room by me,” Wendy said, suggesting she’d likely use it at some point during her marathon telecast.

Wendy told listeners the broadcast would begin Friday at 7:55 p.m., though Wolfie predicted it wouldn’t last anywhere near 24 hours should the Wack Packer drink as much as she suggested she might. “We’ll see about that, Wolfie,” Wendy concluded. “You don’t know jack crap about me.”

Ralph Cirella Criticized for His Handling of Bobo’s Suspension