Beloved stand-up, writer, and all-around entertainer Michael Che has been a cornerstone of “Saturday Night Live” for quite some time, serving as the long-running sketch comedy show’s “Weekend Update” co-anchor since 2014 and co-head writer since 2017. Considering how “SNL” is notorious for its arduous schedule and high-pressure environment, it was easy to understand why the 39-year-old funnyman recently told a comedy club audience his legendary tenure on the show was soon coming to an end. Perhaps more surprising was the interview Che gave last month in which he completely reversed course, telling fans he was sticking around for at least one more season.

On Wednesday morning, Howard welcomed Michael back onto the Stern Show for a riveting discussion covering the comedian’s love life, his friendships with Chris Rock and Jerrod Carmichael, his thoughts on the infamous Oscars slap, the part he played in getting Pete Davidson and Kim Kardashian together, and of course the newly released second of his other acclaimed sketch series, “That Damn Michael Che.” But first Howard was desperate to learn what prompted Che to announce his “SNL” departure and why he so quickly changed his mind. 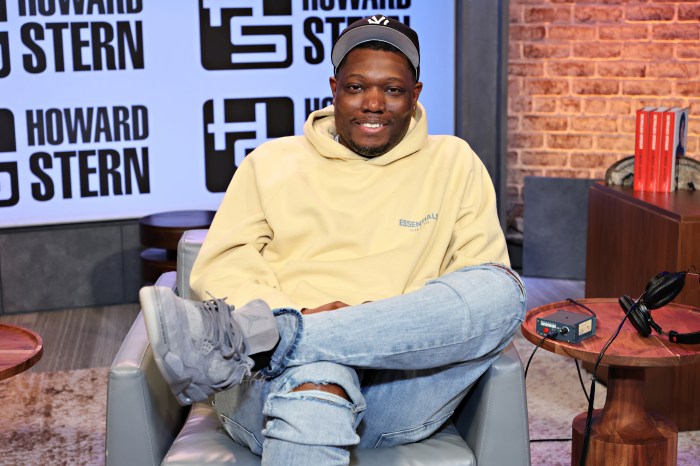 He’d apparently grown so comfortable talking about his “SNL” departure with friends and colleagues that the news just kind of slipped out one night during his set. After what he said drew headlines, he knew he needed to walk things back. But his about-face wasn’t indicative of a change of heart. Che explained he simply didn’t want rumors of his exit to distract from the ongoing season. “I hate when the show feels like it’s about my [bullshit],” he told Howard, adding, “So, I was like, ‘Well, if I’m going to leave, I can announce it when I’m actually gone.’”

That day still hasn’t come to pass. Unlike fellow “SNL” veterans Kate McKinnon, Aidy Bryant, Kyle Mooney, and Pete Davidson, who all said goodbye to Studio 8H a few weeks back when Season 47 concluded, Che plans to return for (at least) one more run. “It came down to why I wanted to leave, which was to have time to do other things,” he told Howard. “So, I talked to Lorne, and we figured out something where I will have more time, [which] made it kind of worth staying.”

In addition to recommitting to a grueling work week, Howard pointed out Che might be leaving a considerable amount money on the table by staying with the show instead of, say, headlining a massive comedy tour. “’Saturday Night Live’ is not infamously known for paying people well,” Howard said.

“No, it’s not,” Che laughed. “But my fantasy is to work the [Comedy] Cellar every day. So, like, to me, you don’t really think about the money, you think more so about that weapon of being on live television—appointment television—kind of the last place where something exciting can happen. Even if it doesn’t, the possibility is there,” he continued, comparing watching “SNL” to watching a NASCAR race or a championship fight.

For every sketch that finds life on “Saturday Night Live,” countless more die during table reads or after dress rehearsal. Sometimes the jokes just don’t land, other times the concepts are a little too wild for network TV. From Colin Jost to JB Smoove, quite a few past Stern Show guests have discussed their most memorable rejected “SNL” sketches. On Wednesday, it was Michael’s turn.

Howard was curious about two hilarious-sounding Che bits which never made it to air, “Half a Viagra”—concerning a pill men take to impress other guys at the urinal—and “Wet Coma,” which featured guest host Owen Wilson moaning in a hospital bed during a never-ending wet dream.

“There are so many bits like that that we would just try at the table and, even if it worked at the table, it was like, ‘We can’t produce this, man. Come on,’” Michael recalled. “There was [also] stuff that killed at table but for whatever reason, you put it in front of the audience and people were baffled.”

Che specifically remembered one unaired sketch he enjoyed which centered around guest host Larry David, cast members Keenan Thompson and Leslie Jones, and the fictional R&B group the California Raisins. “We had like all these drawings of the California Raisins as pimps, and playing basketball and shit, and the audience saw it and they were just like, ‘Absolutely not,’” he said.

Why Breaking Up (With ‘SNL’) Is Hard to Do

Thankfully for one of Hollywood’s hottest power couples, the sketch Che conceived of featuring a kiss between Pete Davidson and Kim Kardashian did make it onto a recent show. Rumor has it, that’s when the comedian and reality star’s love connection began.

“You are quite the matchmaker,” Howard said. “Did he ever come to you and say, ‘thank you for writing this?’” Howard asked.

“Absolutely not,” Che laughed. “He hasn’t mentioned it. In fact, this is the first I’ve heard they’re dating. Is it serious?”

While discussing Davidson, Howard wondered what his, McKinnon, Mooney, and Bryant’s recent departures meant for the future of the “SNL.”

Che wasn’t sure. “They were all kind of like super reliable [cast members] … If we had a show where they’re not in much of the show, it was a concern,” he admitted.

Howard wondered if any of them had talked about leaving in advance.

“Everyone talks about it,” Michael assured him. “Everyone is like, ‘I gotta get the fuck out of here.’ It’s like a prison yard … Everyone is saying they want to leave but yet they can’t.”

“I don’t believe them until the credits change,” he added.

Howard asked if Michael at all envied his ex-castmates’ newfound freedom.

“Part of me gets jealous of them leaving, but part of me would get jealous if I left and they stayed,” he admitted. “You will miss [the show] … It literally raises you as a comic.”

“It’s hard to walk away completely, but I’m sure the first week we’re doing a show and I’m stressed, I’ll be like, ‘I should have just fucking left,’” Che concluded with a laugh.

Why Power Couples Aren’t His Thing

When Michael’s “Weekend Update” partner Colin Jost got together with now-wife Scarlett Johansson, it was not something he was particularly jealous of. “I’m not really into [the general concept of dating] celebrities,” he said before adding, “It’s more like, ‘Oh, you found somebody that makes sense for you.’”

After Howard suggested tying the knot with fellow comedian Nikki Glaser to form a power couple of their own, the “SNL” star didn’t balk. “Why married already?” Che questioned lightheartedly. “Why can’t we just get coffee first?”

As it turns out, this wouldn’t be the first time someone tried to match Michael with another celebrity. “I don’t think they believe me when I tell them I want nothing to do with show business,” he said of castmates attempting to play Cupid. “Fame and celebrity [are what] you put up with for what I actually like to do, which is perform.”

The comic went on to explain part of the issue with celebrity dating is the added scrutiny and unfair treatment of famous women. “The way they treat celebrity relationships, the woman always gets the worst end of the stick,” he observed. “You’ve got to really, really like a motherfucker to invest in that.”

Instead, an ideal partner would be someone he connected with prior to getting famous. “The move is somebody that you’ve known before … that’s kind of seen you grow,” Che said. “That’s why I say it gets harder and harder every day that you don’t relate to somebody because it’s somebody catching you further into this mess of celebrity.”

Between Chris Rock and a Hard Place

After Will Smith assaulted Chris Rock at the Oscars earlier this year, some comedians worried it could incite violence from audiences at their own shows. However, Michael has done his best not to dwell on it. “I try not to think about it onstage because it just makes for attention that’s not exactly fun,” he explained. “To me, comedy is like sex. It’s like [I] try not to think of the horrors, it kind of ruins the mood.”

That’s not to say he doesn’t have his opinions on the incident. “The worst part … they made [Chris] still give out the award,” the comic noted. “If that was like Tilda Swinton, that would have been a 40-minute commercial break until they figured out what happened. [But] they still made him read the fucking prompter after that.”

With Chris being a good friend of his, Che did not like the attention that came from the altercation. “He had a polished act that he wanted to present to people and now people are buying tickets to hear him talk about this dumb shit that he has zero interest in even bringing up,” he told Howard of the aftermath. “He was prepared for something else and [Will Smith] just hijacked his show … It annoyed the hell out of me.”

Considering Rock to be on his Mount Rushmore of stand-up comedians, Michael explained what the veteran’s work meant to him, particularly his 1996 HBO special. “‘Bring the Pain’ probably pound for pound was the most impactful special of my consciousness,” he revealed. “It changed everything … it was definitely a needle drop.”

Rock’s experience and pedigree is something Che has leaned on in navigating his own career. “I like talking about comedy [with him] because … I’m not from a show biz family,” he said, pointing out that people like his brothers or dad wouldn’t understand the upside of leaving money on the table at a place like “Saturday Night Live.” “It’s hard, you know, to talk to other people that I respect in that way, in a relatable way, and get relatable advice, but with Chris and Dave [Chappelle] and even [Dave] Attell and certain guys I look up to, I can kind of talk to them and actually get something useful.”