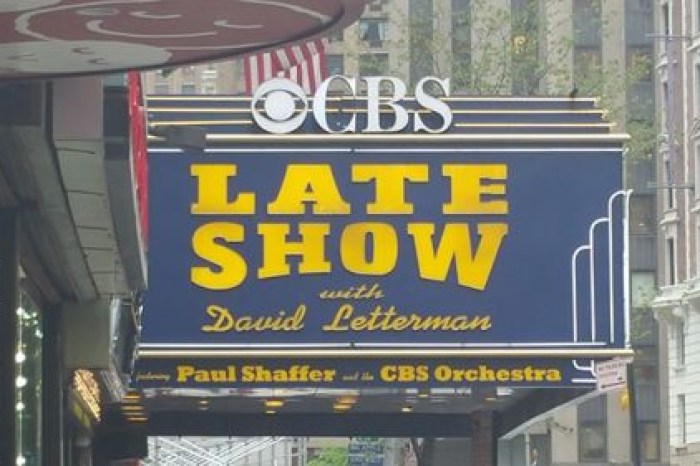 Any time Howard does anything outside of the radio studio it’s an event.

But any time Howard does the Letterman show it’s more than an event. There’s an energy to it. Not just from the fans but from the respective staffs as well.

I’ve always felt it here back in the Stern Show offices. Whenever Howard announces he’s going to do Letterman a buzz runs through the office that doesn’t exist for any other outside show he does. What will he do on the show? What will he talk to Dave about? What havoc and fun will he wreak?

So imagine my excitement when I was allowed to tail Howard throughout his last appearance on the show. The last time he’ll walk inside the Ed Sullivan Theater to sit down with the closest thing he has to a career contemporary. Two broadcasters at the top of their game, highly respected in their chosen mediums, with one of them about to say goodbye to it all. 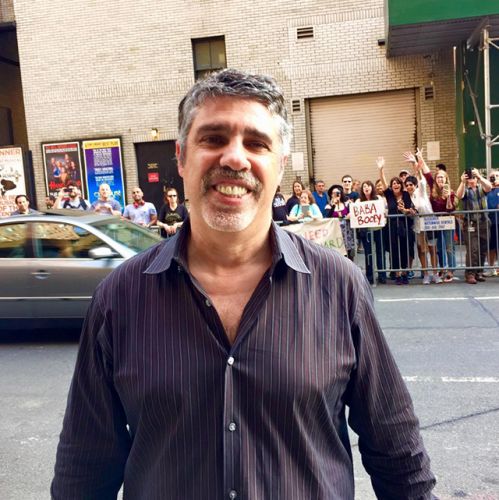 I walked over the few short blocks to the studio with Gary Dell’Abate (side note – how amazing is New York City? You can walk right from the Howard Stern Show studio to David Letterman’s studio in under five minutes. Try doing that in LA). On the way I peppered him with questions about all the other times he’s done this – asking him what to expect, what the schedule would be, and basically annoying him with inquiries that would be answered shortly on their own.

And then we turn the corner onto 53rd street (it’s about 3:30p, with Howard more than half an hour away from call time). So many fans on the street were already lined up they had them behind a barrier across from the studio. Once Gary was spotted shouts of “Baba Booey!” were roaring through the air. Gary – ever the good guy, and ham – graciously walked over to shake hands, sign autographs and take pictures. He’s a mensch. 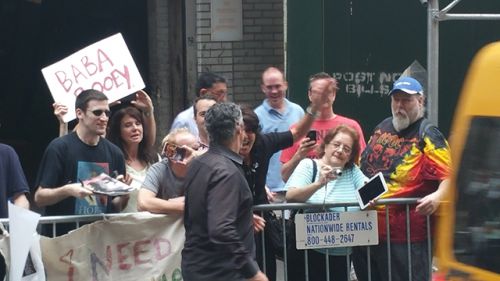 Gary then took us right to the studio entrance where we were greeted by long time staffers of the show ready to shake his hand and say hi. Guys like Jim Del Balzo – Letterman’s sound guy – who has mic’ed Howard for every one of his appearances for the last 22 years. He was excited to talk to me and let me know how much he loved both Howard and Dave and especially loved days like this.

Biff Henderson – the stage manager and on air personality for the Letterman show – met us at the elevator to say hi. Wow – this guy has a real job! I always thought of him as a show character, but much like Howard’s show, Dave has made a career of talking to his staffers on air, incorporating them into the show, and letting their natural abilities and talents take center stage (think of our own JD Harmeyer in this sense). 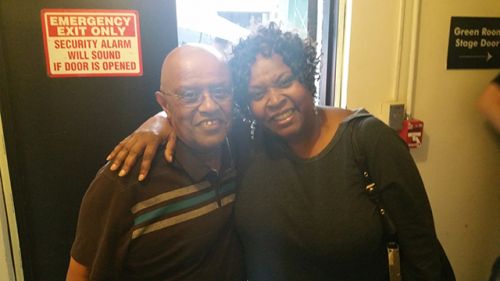 We took the elevator up to a floor with three green rooms on it, all reserved for Howard (he was the only guest, save for Don Rickles who was set up in a room on the first floor). I looked out the window of one of the rooms down to the street below where I saw Vinnie Favale (Vice President of CBS Late Night East Coast) signing autographs to the same fans clamoring for Gary just a few minutes before. Ah, the power of the Howard Stern Show!

Vinnie met Gary and I upstairs. By that time we had been joined by Robin Quivers. Vinnie took me back down because Howard was due to arrive soon and I wanted to capture the moment. It started raining almost as soon as Howard’s car pulled up but luckily he had a gigantic SiriusXM umbrella with him. The crowd erupted in cheers, the paparazzi’s cameras started flashing, and Howard walked out to say hello. This was it, the last time. 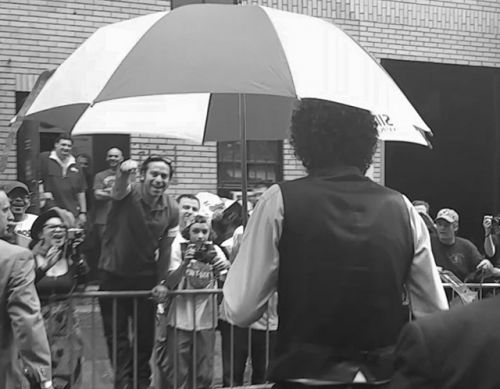 After making his way upstairs Howard said hello to us then went into one of the green rooms to get ready for the appearance. Vinnie went in to say hi to him and presumably go over a few things. Executive producer Rob Burnett also stopped by to say hi to him. Will Lee – the long time bassist for Dave’s band (who has appeared on a couple of episodes of Howard’s show with his band the Fab Faux) also came by to pay respects.

I talked to Rob Burnett after he was done with Howard who told me, “Of all the guests coming on here in the end run this is the one I’m most looking forward to.”

Meanwhile, Robin, Gary, and Vinnie sat around trading stories from the past in another room. Robin was recounting what it was like to work in the same building as Dave during the WNBC days. Vinnie repeated the story he told on air – that Dave used to stop by to watch Howard do his show through the glass (Howard’s studio was right near the main elevator bank everyone used so Dave passed it everyday). 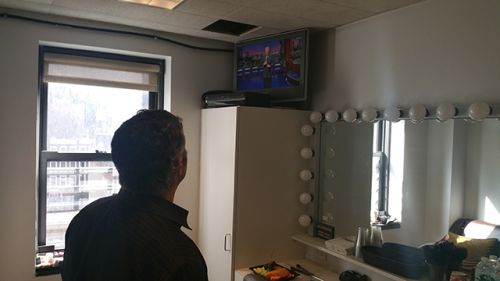 After a quick visit by one of the show’s segment producers Jim the sound guy showed up to mic Howard up. During that time, Dave’s show actually started! (I don’t know why but I was taken by surprise at that. For some reason I assumed we’d move to closer to stage before the show started). I sat there watching Dave’s opening monologue in the green room with everyone and we were soon joined by Howard himself – now all done up in a snappy suit and ready to go downstairs.

Dave started doing his Top 10 list and the room grew quiet as we all watched together. It occurred to me that I was watching Letterman in a small room with Robin, Gary and Howard – laughing and commenting on Dave’s material. It was like being in the coolest dorm room in history and for a minute felt totally surreal to me.

And then it went from zero to hundred. Right after the top ten they whisked Howard downstairs. Within a minute he was right backstage (with me peering through the studio door). And just like that, he’s introduced and on the air!

I was struck by how quickly and non-chalantly this all went down. Knowing how much Howard thinks about his appearances, plans for them, is in pain over them…I don’t know what I was expecting but it was wild to watch him go from just hanging like normal to right on air, doing what he does best.

For his segments they put us in a big room right next to the stage. We sat there watching the show tape in real time – and by now you’ve all seen what went down on air. Half way through Don Rickles and his people came in and Don was sharp as ever – cracking jokes at a few people’s expense. 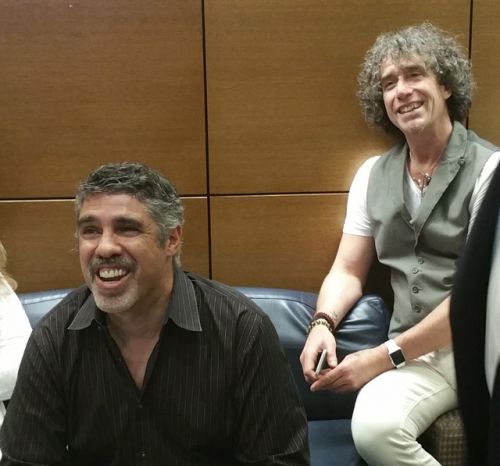 And then magic happened. At least to me. While I enjoyed Howard’s talk with Dave (Montana!?) watching the three of them – Howard, Don and Dave – joke and play off each other and do their thing I was transported. This was amazing. Don was there presumably to pay homage to Dave but all he could talk about was his love for the “young man” Howard Stern. He showered Howard with praise and seemed more interested in talking to him than Dave – as if all this wasn’t about him. It was hilarious and real and heart warming all at the same time. It was a special moment, and again, the last special moment we’ll see between Howard and Dave on a late night show.

And then…it was over. Just like that. Vinnie suggested I run outside to get a shot of Howard walking out. Practically before I could turn around again once I was out there Howard was already coming out through the door. That seemed really fast. He talked to Vinnie for a second, waved to the fans and then was on his way.

Wow – all that build up, the waiting, the worrying and boom it’s over before you can think about it. I walked across the street to get the fans’ reaction – realizing before I got there they hadn’t seen the show yet. Instead I was greeted as a celebrity of sort (hey, if Vinnie can sign some stuff, why not me?) and it was really nice to meet everyone who came to support (and get a glimpse of) Howard.

It was cool to see that many of these fans had made shirts and signs and masks…some creative, some just thrown together. I started talking to them – finding out one had driven down from Ohio, another eating a box of cookies Mariann from Brooklyn had given him. It was just a real nice sense of community.

And that was that. I turned the corner back onto Broadway and in an instant it was like I was never at the show. Just back in midtown Manhattan like everyone else. I walked back to work to get my car happy and tired and running back everything that I had just witnessed. I thought about Howard – about how the episode wouldn’t air for another five plus hours. Does he spend that entire time playing the appearance over and over in his mind? Is he anxious or nervous? Or does he just put it away and move on to the next thing? It can’t be easy.

And it won’t happen again. 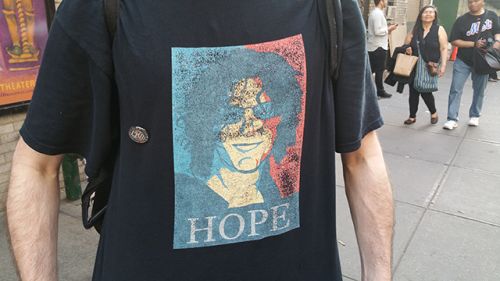 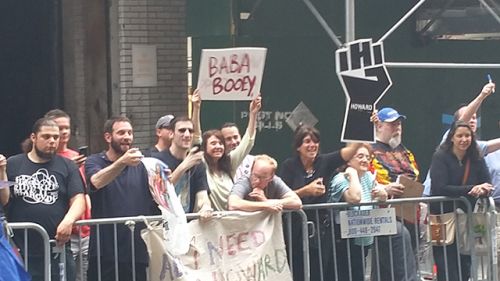 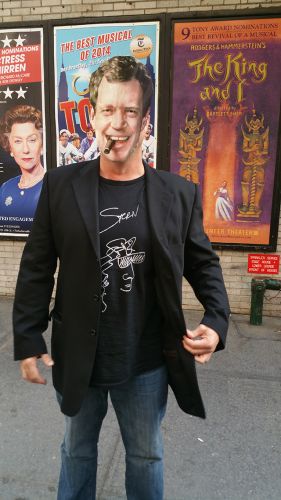 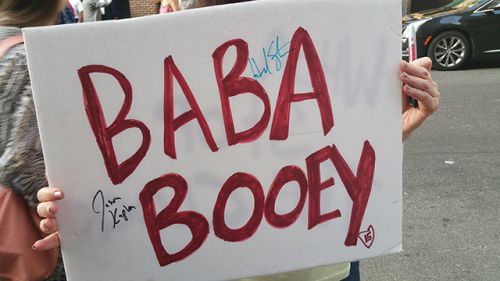