Paul McCartney and Ringo Starr Reunite in the Recording Studio 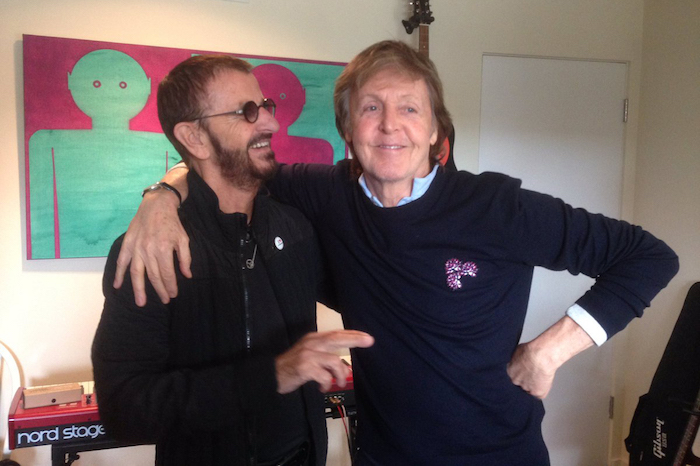 Ringo Starr appears to be getting a little help from his old friend Paul McCartney in the recording studio. On Sunday, the two former Beatles met up to make new music together for Ringo’s upcoming album. The drummer shared photos of their reunion on Twitter along with a caption: “Thanks for coming over and playing Great bass. I love you man peace and love.”

McCartney wasn’t the only famous musician working with Starr that day – the surviving Beatles also posed for a pic with Joe Walsh, Eagles rocker and Ringo’s brother-in-law.

A lucky tour group in Los Angeles reportedly witnessed Sir Paul parking in front of Ringo’s house on Sunday. As his blue corvette pulled up, the tour guide allegedly joked, “Here’s Ringo now!” only to have McCartney step out of the vehicle and stun the crowd.

Ringo and Paul last collaborated on Starr’s 2010 album, “Y Not,” when Paul played bass on the tune “Peace Dream” and sang on “Walk With You.” Though there is no release date set yet for Ringo’s latest album, it is expected later in 2017 and will be his first since 2015’s “Postcards From Paradise.”