“Man of the Woods,” also featuring Alicia Keys, the Neptunes, and Timbaland, is out next month 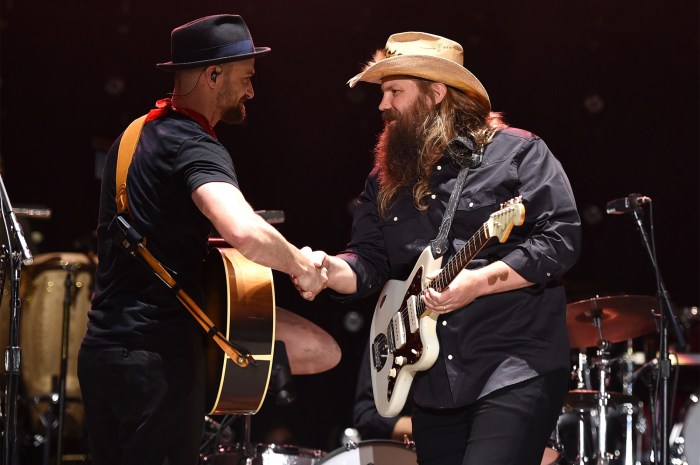 Grammy-winning country sensation Chris Stapleton will once again collaborate with Justin Timberlake, appearing this time on the pop star’s upcoming album “Man of the Woods.”

Announced earlier this week on Twitter (below) and set to hit shelves in February, Timberlake’s album will also feature contributions from Alicia Keys, the Neptunes, and Timbaland.

“Man of the Woods,” Timberlake’s fourth solo effort, will explore “storytelling inspired by his son, his wife, and his personal journey from Memphis to where he is today,” according to a press release.

While Timberlake has collaborated with Timbaland several times before, including on the chart-topping single “Give It to Me” which also features Nelly Furtado, This marks Timberlake’s first in-studio collaboration with Stapleton, however, the two have famously performed together in the past, sharing the stage at the 2015 Country Music Awards as well as at the 2017 Pilgrimage Music & Cultural Festival.

When Stapleton made his Stern Show debut in 2017, he revealed his history with Timberlake actually stretched a bit further back than the CMAs and included a performance at the pop star’s birthday party at the behest of his wife, actress Jessica Biel.

“It was more of a, kind of a, ‘Hey, come out and hang out and play a little bit,'” Chris told Howard, explaining he didn’t get paid, per se, but that Justin and Jessica covered the cost of Chris’s trip, including a first-class flight and some top-of-the-line accommodations. The party was very intimate and Chris told Howard he felt truly welcomed.

Timberlake’s “Man of the Woods” is available Feb. 2, with the album’s first single “Filthy” out this Friday. Listen to Stapleton’s full conversation with Howard here and watch his CMA duet with Timberlake (below).