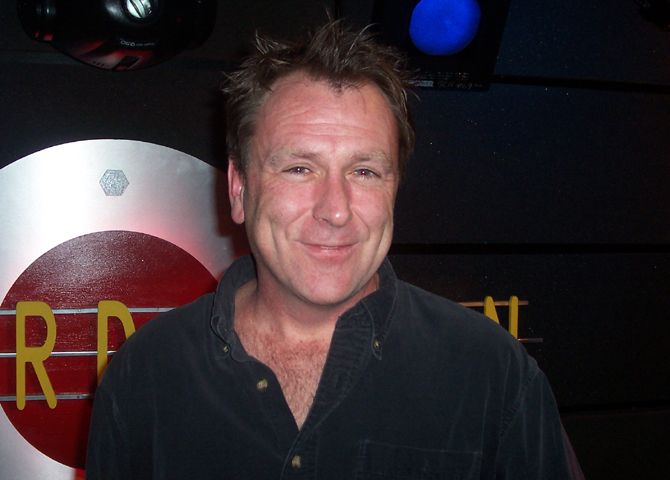 Comedian Colin Quinn stopped by to sit in on the news and promote his appearances at Caroline’s this weekend in NY. Howard told Colin how Gary had just shown him a tape of Colin on some hunting show on ESPN. He said it was really funny because Colin goes to shoot a shotgun and it ended up recoiling into his forehead and cutting him pretty badly. Colin said he thought doing that show would be fun but it wasn’t. Colin is also going to go over to Iraq soon to do some shows. This will be Colin’s second visit to Iraq but it’s currently postponed until after the Iraqi elections since it’s too dangerous right now. Colin said the only thing he asks for is that if he’s kidnapped and beheaded that no one downloads the video for free. Colin also said if he’s kidnapped and gets to make a video tape pleading for his life he would denounce America with no problem. Howard said that’s good, we’ll know he doesn’t really mean it but he has to do what he has to do. Howard asked if Colin could give him a shout out on one of those tapes right before he’s beheaded but Colin said he didn’t want to piss those people off even more by saying the name “Stern”. He did agree to say Fafa Fooey instead though. Howard said that if Colin does that he’ll throw him the greatest funeral and tribute ceremony he’s ever seen. Colin said that he might also give Howard going to SIRIUS a shout out too. Howard loved that even more. A female caller called in and said that if Colin makes it back from Iraq without losing his head she’ll give him some sex. She said she was 23, weighed 110 pounds, was 5’10” and had C cups. That gives Colin some incentive to keep his head on tight.