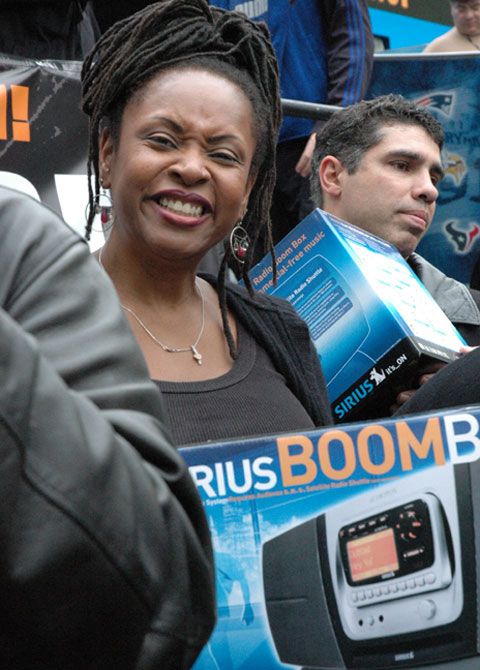 Robin returned to the show today after being out yesterday. She had spent the day at the NATPE Conference in Las Vegas helping to sell her new TV talk show to syndicators and station owners. She said the event went very well but it was a lot of hard work.

Artie asked if she gambled but she said she didn’t even have any time to do that. She said that for about 8 hours she met with a different group of people every 15 minutes to talk to them about her show. She just had to smile a lot and be gracious and answer any questions people had about her show. Howard wondered if they asked about him a lot?

Robin said that everyone wanted to know what Howard thought of her doing her own talk show and whether or not he’d ever be a guest. She told them that Howard won’t be a guest on the show and that he’s happy for her doing the show.

Howard joked that that any show Fred is not on must be a good show.

Robin said that she’d love to have Fred on to talk about being a father but since her show is not star driven she didn’t think she would have Howard as a guest, unless of course he wanted to come on.

Artie wondered if the show not being star driven meant that he could be on it? Robin said absolutely.

Howard said he had to do one of these events once and they’re horrible. You have to meet with one syndicator after the next, one for each market. Howard then pretended to be a station owner from the south and kept referring to Robin as “Robin Givens,” asking her why she broke up with Mike Tyson. Howard joked, “What, you can’t take a punch?”

Howard was also surprised to hear that Sony, which is producing Robin’s show, flew her and her agent, Don Buchwald, to Vegas and back on a private plane.

Robin said that a lot of markets ended up buying the show and it was a very successful trip. She said she’ll have final figures on how her show did later today.