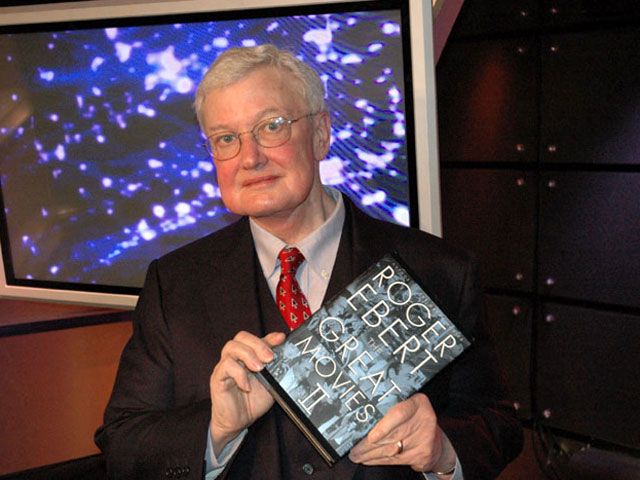 Renowned movie critic Roger Ebert came in today to plug his new book “The Greatest Movies II”. Before he had a chance to sit down, Howard wanted to weigh him because he looked like he had lost a lot of weight. Ebert stepped on the scale and weighed in at 208 pounds. Ebert said he knows he weighs less than 200 pounds so his clothes and shoes must be heavy. He said he lost a lot of weight because he’s been on a special diet since he was diagnosed with cancer. He had salivary cancer, but fortunately it seems to be under control. Although, the cancer had been traced back to a very odd source; Ebert said he was suffering from ear aches back in the 50’s and his doctor treated it with radiation.

Howard and Robin had never heard of that, but Ebert said it was pretty common in Chicago back then. They used to use radiation to try to treat acne, ear aches and all kinds of other afflictions. A lot of those treatments have been thought to have caused thyroid cancer. Ebert said the scary part is, when he received his radiation treatments for his cancer recently, his doctor told him that the dose he was getting was only about 5% of the dose he got for his ear aches fifty years ago! Artie joked that he would try radiation to cure his backne.

Howard heard that Ebert was giving everyone a hard time about getting coffee in the green room. Ebert said he woke up very early to be here and he likes to have a cup of coffee in the morning, but was informed that our coffee machine was broken. He was upset, but then someone got him coffee. Ebert also told Howard that he was getting SIRIUS installed in his new Lexus. He was asking Gary about it earlier and Gary said Ebert has really odd taste in music. Gary asked Ebert what his favorite type of music was so he could tell him which channels to listen to on SIRIUS and Ebert surprised him by saying he was into “Chutney Soca.” Gary had never heard of that and Ebert seemed surprised. Ebert explained it was a mix of acoustic music from Trinidad with singers from India, but everyone was still confused. Ebert promised to get Howard some Soca music to listen to, but Howard told him not to bother. Later during the interview, Howard got some Soca songs and started to listen to them. They sounded like a lot of wailing over bongos. Howard wanted Roger to dance to it, but he wouldn’t. Robin said it sounded like Howard was playing the music at the wrong speed. Artie said he couldn’t even eat listening to it.

Ebert said his favorite movie this year was “Million Dollar Baby” and he expects it win a bunch of Oscars. He also loved Virginia Madsen in “Sideways” and thinks she should win for Best Supporting Actress. Howard hadn’t seen that movie, but heard that Scott DePace hated it. DePace came in and started trashing the movie, calling it “horrible.” Ebert poked fun at him, saying that “horrible” isn’t a good description and he’d like to give Scott some grammar lessons. Scott went on with his review and complained that the movie had no “finality.” Everyone laughed because he wasn’t using the word right. Howard told Ebert that he put Paul Giamatti in his first big movie and Ebert agreed that Howard helped jump star Giamatti’s career. Towards the end of the interview, Ebert told a story about the legendary film director Russ Meyer. Meyer was best known for making B level films that often featured large breasted women who would eventually get topless during the movie. Russ and Roger were friends and Roger went to visit him one last time when Russ was dying. Russ was suffering from Alzheimer’s and Roger said it was sad because he didn’t recognize Roger or his wife and didn’t seem to know who he was or that he had once made movies. During the visit, Russ’ nurse came in to drop off some water and after she left Russ turned to Roger and said, “No tits on that one.” Roger couldn’t believe that Russ couldn’t remember anything, but still had the wherewithal to comment on the girl’s rack. The story was funny and touching, but of course, no one got to hear it because it was bleeped off the air. “Tits” is on the seven dirty word list so it can’t be broadcast. Ebert said that was ridiculous and that everyone uses the word. Howard said he knows and that’s why he can’t wait to leave terrestrial radio.