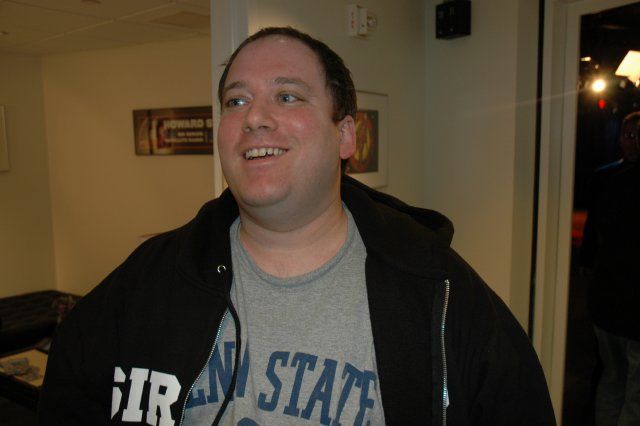 Today was Tom’s big meeting day with the on air and sales staff here at KROCK. Earlier in the show Cabbie said that everyone was scared that they were going to lose their jobs but he knew he wouldn’t because he does his job right.

Artie and Benjy told Howard they wanted to go to the meeting and Howard told them to report back. Artie came back a few minutes later saying Tom just rudely kicked him out. Artie said they actually had a buffet back there and he got all excited but Tom told him to leave. Fortunately, Benjy stayed behind by stuffing himself into one of the cabinets back there. Benjy called in on his cell phone to report from the closet. He was whispering into the phone and Howard tried to get him to hold it out so he could hear what was going on.

He must have stuck his hand out too far thought because he was immediately discovered. Howard tried to tell Benjy to put Tom on the phone but Benjy got disconnected. Howard figured that Tom must have hung the phone up and when Benjy came back he said that Tom did look pretty mad at him. Howard said that meanwhile, he had the memo that Tom put out about the meeting and it had a bad grammatical error in it. The memo stated that “Their will be a meeting next Monday?” using “Their” instead of “There”. Howard wondered who was in charge of putting those memos out.

From Rock to Rock