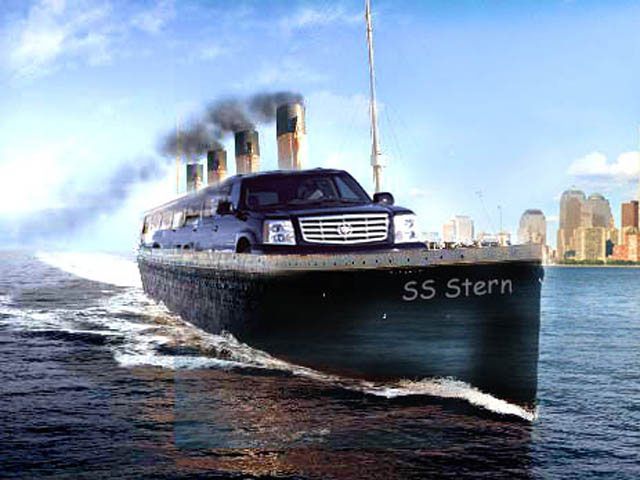 Photo: The Howard Stern Show
A caller wondered how many zip codes Howard’s new, huge, stretched out Escalade limo in it. Howard had joked on Friday that the limo was so big it was like a cargo ship and he started calling it the SS Mund. Howard said the seat in the back he uses is so uncomfortable. He said it’s small and it’s like a hard bench seat which he keeps sliding off. He was trying to read the paper and eventually just sat on the floor of the car because it was more comfortable. He said the worst part about the car is getting in and getting out of it. Howard said that first of all, his parents aren’t going to be able to get in and out of it, so that’s a problem. And secondly, Howard said he has to sit on his ass and scoot his way out, which is really annoying. Howard said that this weekend Beth was scooting out of the limo and tore her dress on the floor of the car. Ronnie came running in the studio saying he tried to make the limo so Howard would love it and now all he does is complain about it. He yelled that he even put a nice flat TV in there for Howard!! That reminded Howard of another complaint he had about the car. It turns out the controls are hard to reach from where he sits, and he also can’t easily reach the mirrors in the car. Ronnie said he doesn’t understand that, because he can reach everything fine and he’s much shorter than Howard is. Howard told Ronnie to just go and have the car “stolen”.
Previous Show Next Show