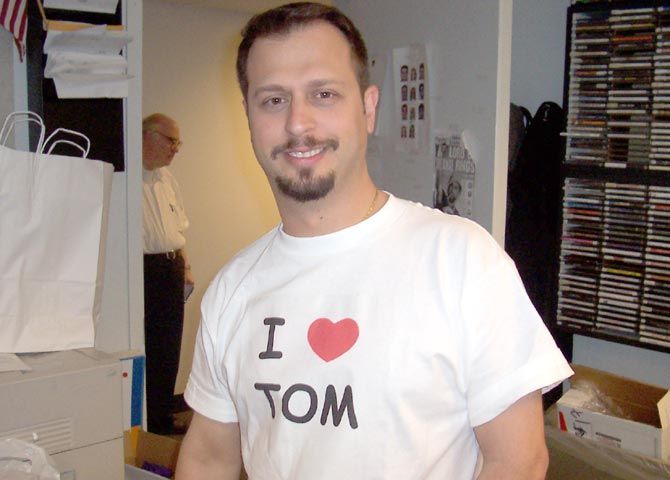 Photo: The Howard Stern Show
Sal the Stockbroker, who is currently working for the show on a limited basis, came close to losing his job on only his second day when he pissed off General Manager Tom Chiusano on the air. Sal was goofing on Tom for not having his tie tied in the elevator this morning, saying he thought it looked unprofessional. Tom said that is always how he comes to work and he certainly doesn’t need Sal telling him he looks unprofessional. Sal then said that Tom was real mean to him in the elevator and Howard told Tom to try to be nicer to Sal. But then Sal called Tom a douchebag and Tom got so mad he stormed out of the studio. Howard told Sal that he had crossed the line and better go apologize to Tom before he gets fired. Howard debated whether he should ignore the Tom/Sal feud or step in and try to put out the fires during the commercial break. Howard figured either way, he’ll just probably stay out of it. Later in the show Gary announced that Tom and Sal had made up – for now.
Previous Show Next Show