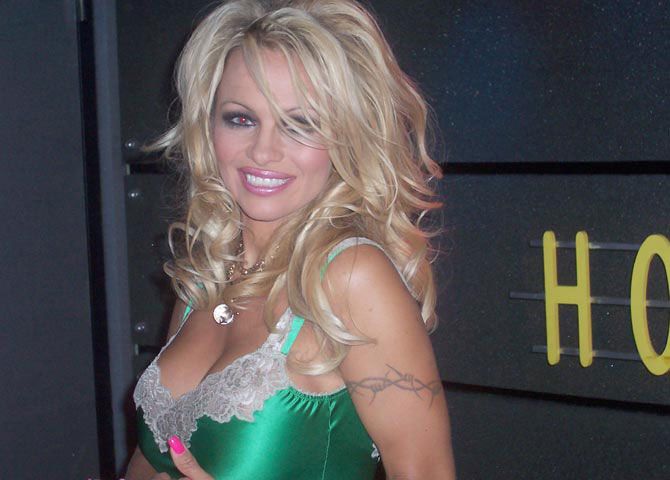 Before he could take a break, Howard took a call from Pamela Anderson. Pam confirmed the rumor that she had broken up with her most recent boyfriend, Stephen Dorf. She joked that they broke up right after a caller on this show said they had seen him “all over” some chick at a club somewhere. Howard recalled seeing Pam on Jimmy Kimmel’s show recently in a very hot and very little outfit (later, Pam also confirmed that she wasn’t wearing any underwear either). He said that he could tell she was in great shape because she sat with her legs crossed and there were no signs of cellulite dimples anywhere. Robin wanted to know why Pam wasn’t on FHM Magazine’s recent Top 10 Hottest Women list, which prompted Howard to ask Pam who was on her list of Hot Women. At first Pam tried to get out of it saying that she really admired old actresses and they were all gone now but then she got a little more up to date with: • Elizabeth Hurley – Gorgeous and has a great vibe • Robin Quivers – Of course • Howard suggested Terri Hatcher – No comment • Paris Hilton – Cute • Britney Spears – Adorable (let her be pregnant) • Jessica Simpson – Cute but Pam’s not into the “camera’s in your house” thing • Madonna – Looks great for her age, but is not her “type” • Sally Jesse Raphael – Not top 10 • Jennifer Lopez – Hot when she doesn’t wear fur, and her ass is NOT too big. Then Howard asked about her top 5 guys but didn’t get too far: • Brad Pitt – That would be too obvious • Mick Jagger – Pam would do him if they were madly in love • Sam Elliot – ??? Pam says she is happy now with her life. She works on her TV show “Stacked” (Wednesdays at 9:30 on Fox, by the way) only two days a week, while the kids are at school, so she gets to spend a lot of time with her kids. Howard asked when she last had sex and Pam said she hasn’t since she broke up with Stephen a few months ago. Robin wasn’t sure about that though, she said she had heard about a wild party in a hotel in London. Pam said it was wild party, with lots of naked people, but there was no sex for her. This reminded Howard of the protein shake question from yesterday, so he asked if Pam drank them, and, once she figured out what they were, she said “absolutely, that’s what makes your hair grow!” Howard noted that the ratings for “Stacked” are very good and Pam is very happy with that fact. She said Fox recently moved the show to 9:30PM which really excited her because it means she no longer has to tape down her nipples!! Howard asked Pam to play F – Marry – Kill with him, and after explaining the game to her, gave her the names; Tommy Lee, Kid Rock and Stephen Dorf. At first she wanted to do all 3 to all 3, but then Pam decided that if she had to marry one of them, she’d marry Tommy since she already knew what that was like. Then she decided to kill Kid, since he was older than Stephen, and then F Stephen one last time (who knows, if she was married to Tommy at the time, maybe he’d kill Dorf). Pam said that she should hear soon whether or not “Stacked” will be picked up for next year and if it is, she will come to New York next week and if she does, she’ll do something wild with Howard- so stay tuned!!! Pam went back to bed and Howard went to commercial.