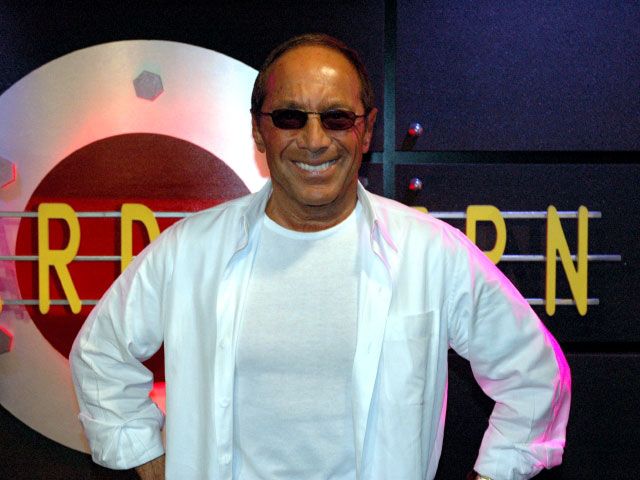 Singer/song writer Paul Anka stopped by today to promote his new album, “Rock Swings”, which is a compilation of rock hits from the 80’s and 90’s set to swing music played by a big band. As he came into the studio, Fred played Paul’s version of Nirvana’s “Smells Like Teen Spirit” from the CD.

Howard thought it sounded great and wondered if Paul listened to these songs a lot before he made the album. Paul said with 5 kids, he’s heard them all, and he does like them. Howard brought up Pat Boone’s attempt at something like this, but Paul thought Pat wasn’t all that serious since he would wear leather and chains when he performed. Howard really wanted to know about Paul’s involvement with the Tonight Show theme.

Paul said he wrote it and gave Johnny Carson half of the rights to it, but since he was just starting out at the time, it was a big break for him so he never really minded. He said that one song has earned him plenty of money so he’s not complaining.

Howard asked about Paul’s divorce. Paul said it was pretty amicable and he’s had a steady girlfriend ever since, so he’s happy. Howard was surprised that Paul didn’t go crazy after being married so long, but Paul said he’d already been there and done that when he was young; running around with Frank Sinatra and Sammy Davis, Jr. Howard asked if he ever did any covers of rap tunes, but Paul said his album was all rock. Howard said he wanted to do a big band version of DMX’s “My Niggas” and launched into a pretty good rendition of the rap hit. Paul told him not to quit his day job.

It Doesn’t Matter to Paul

Howard had heard that Paul was supposed to be on the plane with Buddy Holly the night he died. Paul said he was on another plane and that Buddy had convinced the pilot to take off in bad weather, which turned out to be a bad decision. He was, however, good friends with Holly and had written “It Doesn’t Matter Anymore” for him. Howard played some portions of a famous recording of Paul he had found on the Internet. The recording was made during rehearsals for a live show about 15 years ago, by someone Paul didn’t seem too fond of. In the clips Howard played, Paul gets really upset at some of the guys in his band and yells at them. Paul laughed and said, yeah he did yell, but the band got things right and the show was great. CBS Vice President for Late Night Programming, East Coast, Vinnie Favale came into the studio to say that people were selling shirts with quotes from this recording on them that were pretty funny. Howard asked Paul if he got any royalties from these shirts. Paul said no, and he didn’t want any. Then Howard played a couple of song parodies Dan had made from the clips that were pretty funny.