But the Movie Was Great 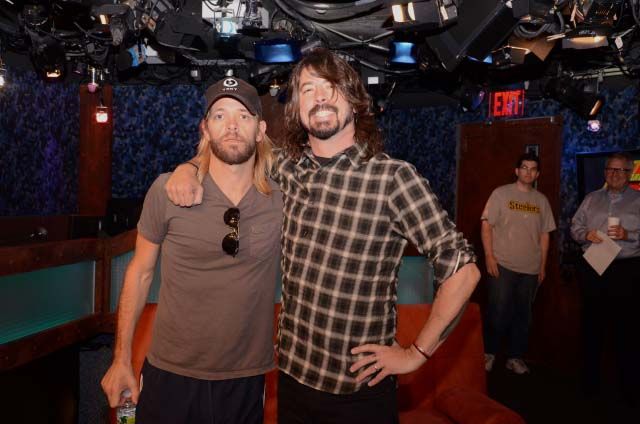 Howard said he was ready to bring Foo Fighters Dave Grohl and Taylor Hawkins into the studio, but first he wanted to find out just how badly Richard Christy wanted to meet one of his rock and roll idols.

Richard came in and said he would do just about anything to meet Grohl, the former Nirvana drummer, who had been a big influence to Richard as a speed metal drummer.

So Howard had Sal come in with some suggestions. They were: a.) Suck on a spit covered banana which was sticking out of Sal’s fly or b.) Let Sal put his testicles on your face (aka “tea-bagging”). Richard wanted to know who was gayer, him for wanting to meet someone so badly that he would subject himself to this, or Sal for dreaming up these tasks.

Artie summed it up by saying “Both,” (and reminded us all why we missed him so much). Richard chose the banana so Sal hocked up a good portion of spit and lubricated the banana while he unzipped his pants and set the fruit in its place.

The entire studio erupted in howls of laughter as Richard got down on his knees in front of his prank call partner. Those howls got even louder as Sal took off his shirt, (for effect he claimed). Richard asked for some towels in case he vomited during the ordeal. Just before he started, Richard noted how gross the spit looked on the banana, causing Sal to hock a little more on for good measure.

Richard was supposed to quack the familiar choking quack we have all grown to love while he did this, but those sound effects were drowned out by screams and laughter — mostly from Howard and Artie, but the whole crew was affected. Then Richard started to puke, just a little, but enough that it would have given Jeff the Vomit Guy wood. After everyone settled down and Richard cleaned up, Howard let Richard meet his idol.

Richard said that was before his time with the band, but thought it was cool anyway that he knew about them. Dave thought it was pretty funny that Richard was a great drummer who was now sucking on banana in order to me other drummers. He said he couldn’t wait to give up drumming so he could start sucking bananas too. Richard he’s now doing his dream job, so he was happy. Dave wanted to know if Howard was taking Richard to SIRIUS with him and Howard said of course he was.

The reason for Dave and Taylor’s visit today was to promote the Foo Fighter’s new double disc CD, “In your Honor”, which features one disc of rock music and one disc of acoustic music. They had been promoting it like crazy and were both working off of little to no sleep. Taylor told Howard how he wrote and sung one of the songs on the album and he’s the first person besides Grohl to do that. Howard asked Taylor about all his drug problems and how he almost died from them. Taylor said it got really bad and he was actually clinically dead for awhile. He said he didn’t see any white light or anything like that though.

Taylor finally got himself in rehab and said he was amazed by all the people sneaking drugs in on the inside. Howard told the guys about how he once accidentally took four hits of acid at once in college. He said he didn’t realize he was supposed to break up the square into four small ones so he just did the whole thing and nearly lost his mind. Howard said he went insane and stopped doing drugs after that.

Dave announced that he’s gotten married since he was last on the show. He said his wife, who is a former model, wanted to come down, but Dave didn’t think that would be a good idea. Howard sounded a little bit bummed out over that.

Howard asked how the marriage was going and Dave said good. They have sex about two or three times a week and he’s not having sex with any other women. He said when Taylor nearly died, he realized how important a good relationship was to him so he got really serious about her.

Dave might not be sleeping with other girls, but apparently he was checking out Jessica Simpson’s ass an MTV award show. Dave said she was right in front of him and he was leering at her ass and making mock-grabbing motions with his hand. Then while walking backstage, Jessica’s dad grabbed him and yelled at him about it. Dave thinks he was just kidding though.

– Neither of the guys are really into rap music, but Taylor loves this guy Kool Keith and his song, “I Don’t Believe You”- Dave said there was no truth to the rumor that he was going to tour with Led Zeppelin as their drummer, but he wishes it were true- Dave performed “Another Round”, an acoustic song of their new record, live in the studio- Dave once performed a live versoin of Creed’s song “Arms Wide Open” on the radio where he mocked the way Scott Stapp sings. Dave said that one time he was in a bar and Scott came up to him and got in his face about the song and started demanding Dave sing it for him right then and there. Then the entire Creed band got behind Scott and Dave got really freaked out. Howard found a copy of that song and played it on the air.