The Triumphant Return of Eric the Actor 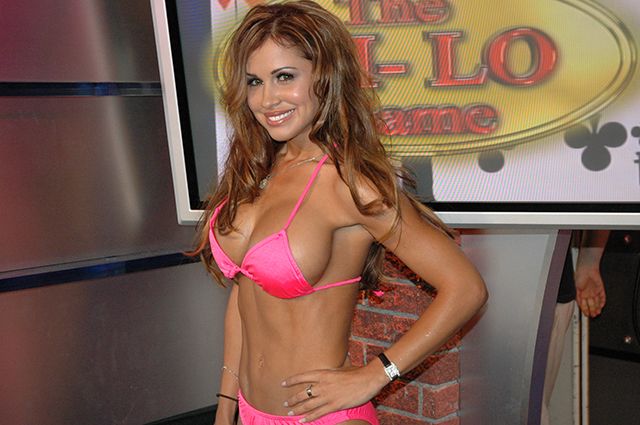 Artie said a few years ago he was a guest photographer for Playboy and his agent told him he could pick any playmate he wanted to shoot so he picked Walcott. Artie said Walcott might be his favorite Playmate of all time so he was really excited.

Unfortunately, Walcott didn’t share Artie’s enthusiasm and turned down his request. She ended up being photographed by Carmen Electra and Artie said he was glad she did because it was one of the hottest things he ever saw.

Howard said he bet something went on between the two of them. Howard thinks that Carmen is more into chicks than she lets on.

…But Does Not Deny There Were Others

Jennifer Walcott came into the studio before the game started so the guys could take a look at her. Everyone immediately said how smoking hot she was. Jennifer apologized to Arte for not wanting to do the shoot with him, but she said she felt more comfortable with a female photographer and especially someone like Carmen who had posed before and knew what to look for. Artie said he completely understood and it was not a big deal at all. Howard said he was getting distracted because Gary was standing behind her in a monkey mask.

Gary said that Howard always makes him get in masks when a hot girl is in the studio so he was trying to oblige by him. Howard laughed and said that the monkey mask was funny, that’s why it was distracting. Howard got back to checking out the 5’2″, 103 pound Playboy Playmate and asked her if anything went on between her and Carmen Electra. Unfortunately, Jennifer said nothing went on. Jennifer has had lesbian experiences before though.

She said once she made out with Playboy Playmate Kim Stanfield.

She said the two of them were looking to hook up with guys at a party, but couldn’t’ find anyone so they started making out with each other. She said she’s had lesbian sex before too, but not with a Playmate. Howard said Jennifer must fend guys off like crazy, but Jennifer said that’s not necessarily the case. She said she won’t approach guys and a lot of guys are too intimidated to approach her so it’s not like she gets hit on all the time. She said she’s actually gotten dumped a few times too. Howard said that was absolutely impossible to believe.

He said she’s so hot that he couldn’t imagine any circumstance where he’d want to break up with her. Howard said if she was incontinent and made a mess in his bed every night he still wouldn’t break up with her. He’d just throw out the sheets in the morning and look forward to a hot night of sex with her.

Going back to her hot lesbian story, Jennifer said it actually ended up being a weird experience for her. She said she was trying to get back at her ex-boyfriend by making him jealous so she started making out with this girl at a club. She said the girl acted like she wasn’t very experienced with lesbianism, but that ended up being a lie because she was way more into lesbianism than she let on. Meanwhile Jennifer had never been with a girl before. Jennifer said the girl was very pretty and dressed really sexy. The making out led to going back to Jennifer’s place where they had sex. Since Jennifer had never been with a girl before, she didn’t do much, but the other girl did a lot. That’s when she realized the girl was much more experienced than she let on. Jennifer wanted that though because all she cared about was getting off. Although she was a little skeeved out about possibly catching a disease so she didn’t go down there. Jennifer described the feeling of having a girl use her tongue on her as “different.” What wasn’t different was what happened the next morning.

She said she woke up and was shocked to see the girl still in her house. Apparently the girl saw it as more than a one night stand and wanted a relationship with Jennifer. Jennifer wasn’t looking for that and had to kick her out. However, since the girl didn’t have a ride home, Jennifer let her hang around for the day and they experimented with vibrators, tongues and fingers — sometimes all at the same time. The next day when Jennifer drove the girl home, the girl took her by the hand and told Jennifer she was in love with her. She started calling Jennifer non stop to the point where Jennifer had to get her number changed. Howard joked that if it was him, he would have tied Jennifer up in his apartment so she couldn’t leave.