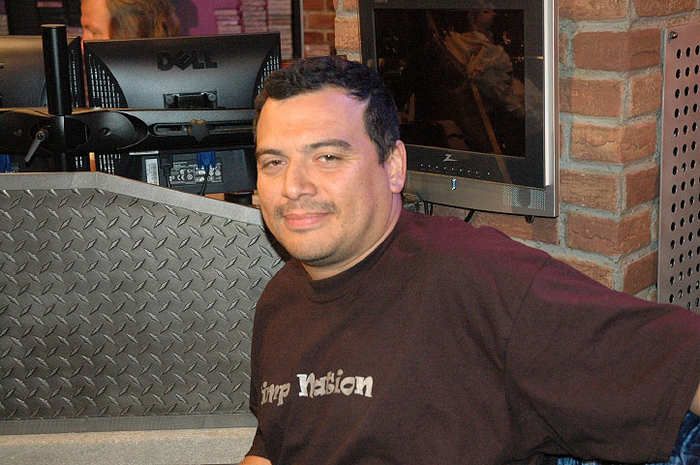 Howard welcomed comedian Carlos Mencia into the studio to sit in on the news this morning. Carlos has a new show called “Mind of Mencia” on Comedy Central which Robin said she heard was very funny. Carlos said he was supposed to be on after “Chappelle’s Show” but when Dave took his little hiatus, his show got moved to follow “South Park.” According to Carlos, his show had the third highest-rated debut in Comedy Channel history.

Howard read in his notes that Carlos was one of 18 kids but that his parents “gave” him to his aunt and uncle but kept all of their other children, including the youngest that came right after Carlos. He said he got even, though, by becoming the most successful of them all. Carlos said he spends much more time with the mother that raised him (his aunt), than his birth mother. Despite loving his birth mother, it still kind of bothers her that he spends so much time with his aunt.

Howard asked Carlos about his feud with George Lopez, who accused him of stealing jokes. Carlos said he learned a long time ago from the legendary Sam Kinison, not to worry about being accused of stealing jokes if you aren’t. Howard gave Carlos another plug for his TV show as well as for his new DVD, “Not for the Easily Offended.”

Carlos had lots of good stories to tell from his days in the comedy trenches. He recalled the time he got into a fight with George Lopez and George started choking Carlos, until Carlos told him to stop before he “went ghetto on him.” He also talked about how his mother burnt him with the electric cord off an iron once. Howard seemed a little shocked by this and Carlos said he was selling coke at the time. Howard and Carlos compared stories growing up in bad neighborhoods and Carlos said there was a lot of discrimination amongst the Hispanics he grew up with. As a Honduran, Carlos was pretty low on the totem pole, saying the Mexicans in his neighborhood called him the wetter wetback.

Carlos also told Howard about the night he was allegedly heckled by Snoop Dogg at a club. Having grown up in a tough neighborhood, Carlos said he didn’t back down and their war of words soon got very heated. It wasn’t until Shaquille O’Neal supposedly stood up and told everyone to cool down that Carlos and Snoop both backed down. Carlos said he heard later on that he came very close to being shot and that he owes his life to Shaq.