Legendary insult comic appeared alongside Artie Lange in the film 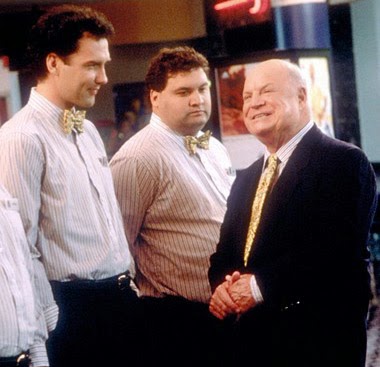 Howard started off this morning trying to figure out how long he’d been on terrestrial radio (as a professional).

His daughter had asked him this the other day and he had answered 38 years, but he wasn’t really sure how he came up with that number. Robin said there was no way that could be right so Howard blamed the inaccuracy on her. He said that was the number he was going to get tattooed on his arm, so he was glad they were having this conversation. Howard figured he got his first professional, on-air job in 1977, which means he’s been on the air for 28 years.

For the last few days, Howard and Artie have been talking about Don Rickles performance in Artie’s film, “Dirty Work”.

Gary went out and got a copy of it and Howard said that, despite Artie constantly making fun of the movie, the very first scene was hysterical. Artie said one of the best things about working with Don Rickles was that he never stuck to the script — because he said it sucked — so you never knew what he would say next.

Artie said Rickles ragged on everyone and everything both in character and out, including the film’s director, Bob Saget. Howard played a clip in which Don leans over and talks to Artie’s belly, calling him tubby and telling him he looks like a baby gorilla who should be in a zoo. When Norm Macdonald laughs at this, Don turns to him and tells him he’s got the personality of a dead moth.

Artie said Rickles once told him that he did very well in some scene they had done and just when Artie started to feel good about it, Don wished him good luck in the construction business. Howard said he was surprised Don acted this way because the one time Don came on the show he barely spoke. He later learned that Rickles was intimidated by him, although he can’t imagine why. Artie said Rickles was particularly hard on Saget. Howard thought this was funny because John Stamos, who was in “Full House” with Saget, says Bob hangs out with Rickles a lot. Howard can’t picture that though.

Artie recalled when the two first met, Rickles said to Bob that when he told Martin Scorsese who his new director was, Marty grabbed his chest in pain.

Scotty’s Finally the One Getting Beamed Up