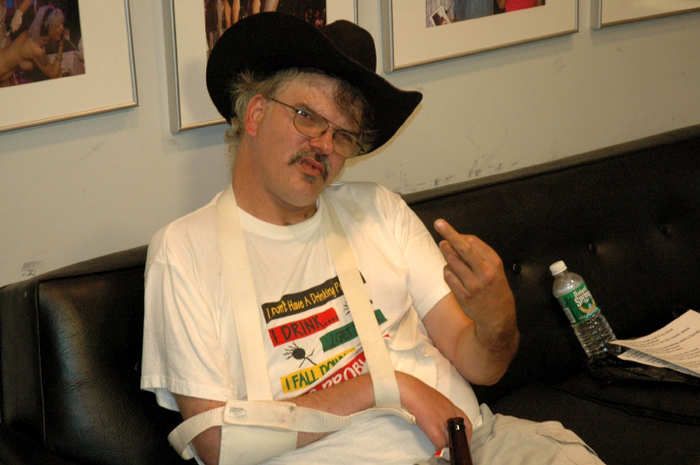 Howard announced Willie Nelson would be in the studio tomorrow. When he heard the news, Jeff The Drunk called in to see if he could come down to meet him. Howard wanted to let him but thought he’d be too much of a pain in the ass. Robin remembered the last time he was there Jeff fell in the hallway and stayed on the floor for 15 minutes. Howard commented that Jeff drives Ronnie nuts when he’s in the studio because Ronnie has to baby-sit him. Jeff denied all the allegations and promised he’d be on his best behavior. Gary brought up the fact that Jeff showed up at the studio last time even though he was asked not to come, and then cried to get on the air. To top it off, he asked for money before he left. Jeff again claimed that wasn’t true, and he got so mad he hung up. A few minutes later Jeff called back and apologized for his behavior. Howard said he definitely could not meet Willie. Robin thought that maybe missing a few shows would be a good way for Jeff to learn how to get back on the air. Howard commented that they love what a mess Jeff is, yet they were yelling at him for being too messed up. Once again Jeff swore he’d be on his best behavior, so Howard said he’d think about letting Jeff visit. Later in the show, Howard got Jeff on the phone again and said he could come down if he agreed to the following: (1) he doesn’t ask for any money, (2) he leaves when he’s asked to go, (3) he doesn’t harass the interns, (4) he shows Ronnie respect, (5) he doesn’t ask to hang out with Willie, and (6) he doesn’t defecate in his pants. Howard also gave Jeff $500 from the movie, “Red Eye,” but warned him that the money wouldn’t be there tomorrow. Jeff agreed to all the conditions and said he was pumped about meeting Willie. Artie seemed a little worried though because the “Red Eye” money comes with the chance to win a red eye flight back from LA with Artie.