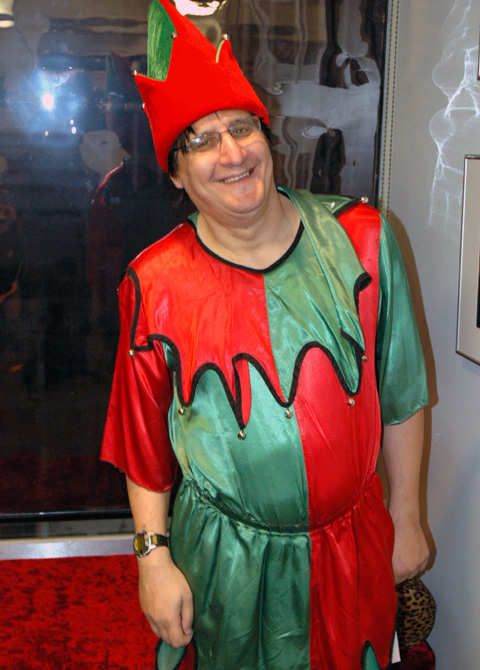 Howard brought up that Gary did an appearance at a car dealership on Saturday, but that no one, except High Pitch Eric and Elephant Boy, showed up. Gary reported that soon after the duo arrived it started to smell so bad that he thought the dealership must have been located next to a sewer.

As it turned out, Elephant Boy had gone number two in his shorts, and it was on his leg and socks. Gary commented that the smell was so bad that it almost knocked him over. Elephant Boy called in and admitted that he had the accident while on the train going to the event, but that he showed up anyway because he was so excited about seeing Gary. He went on to say that before he got to the dealership, he stopped at a supermarket bathroom to clean himself off the best he could. However, when he arrived he noticed he still had some remnants on his leg, and was seen attempting to wipe it off on a tarp at the dealership. Given his routine of handling the situation, Robin was convinced this was a common occurrence in Elephant Boy’s life. However, he insisted this was the first time it had ever happened. Elephant Boy assured Howard that when he got home he took a long shower, and that he washed his clothes thoroughly. Howard was disappointed with this because he wanted the shorts to be put on display in the Howard Stern Museum. Gary mentioned that after finding out where the smell was coming from, he realized he had shaken Elephant Boy’s hand when he got there, so he made a mad dash to wash his hands. The problem was that the bathroom at the dealership didn’t have soap in its dispenser, so Gary was asking everyone where he could get some. Howard noted that not only did Gary attract no listeners to his appearance, but he was also being a pain in the ass to the people at the dealership. Howard told Elephant Boy that in the future he should start carrying things in his ever present fanny pack that actually pertain to his fanny.