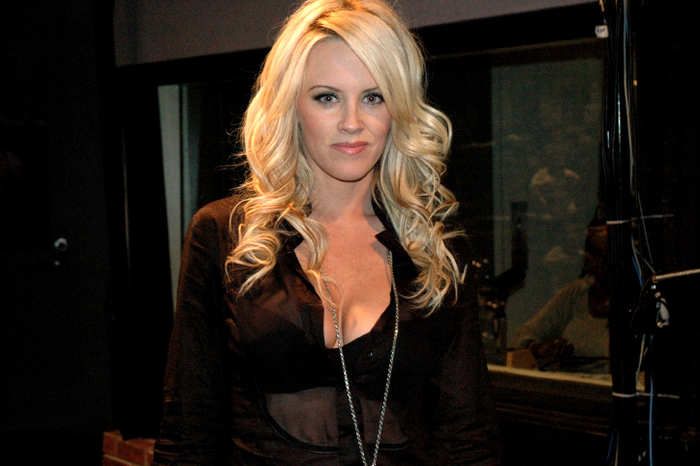 Jenny McCarthy stopped by to talk about her movie, “Dirty Love,” as well as her recent divorce.

As soon as she walked into the studio Howard pointed out that she looked much hotter now that she didn’t have a husband. Jenny explained she and her ex-husband called it quits about three months ago but they’re still really close. She added that, even though she has custody of their daughter, her ex-husband takes her on the weekends.

Howard mentioned he’d come over to Jenny’s house on the days her ex-husband had their daughter.

Jenny reminded Howard the last time she was on she promised she’d give him a shot if she ever split with her husband. She then assured him the offer was still on the table.

Is Jim in the Picture?

Howard asked Jenny if the reports he had heard about her dating Jim Carrey were true.

Jenny admitted she has met Jim a few times but denied they are an item. She did say, though, she would go out with him in a second if he called her.

Artie Lange wondered what Jenny would do if both Jim and Howard asked her out on the same day.

She responded the three of them would probably have group sex. Despite her claim of being single, Jenny wouldn’t swear on the life of her child she wasn’t seeing Jim. So, Howard took it to mean they actually are together.

For Love of the Carmen

Jenny commented that, since she was no longer married and isn’t seeing anyone, she pleasures herself frequently. She admitted she even did it recently while watching one of Howard’s E! shows, but she was thinking about that day’s guest: Carmen Electra. Jenny claimed she was so turned on by Carmen’s appearance she cast her in “Dirty Love.” She went on to say she tried to get it on with Carmen during the shoot, but that rocker Dave Navarro has her so whipped Carmen wouldn’t go through with it.

Despite her attraction to Howard, Jenny figured she was too old for his liking. When Jenny revealed she is 32, Howard informed her she is the same age as Beth. Jenny commented she wanted to put Beth in “Dirty Love” but decided against it out of fear Howard would badmouth the movie if the two broke up.

Done in a Jiffy