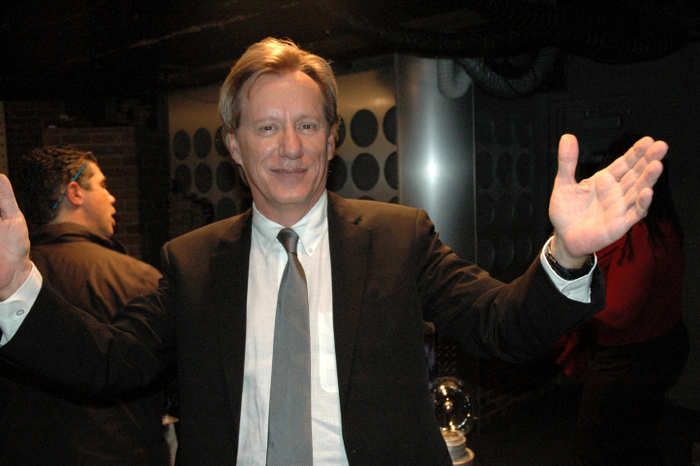 Actor James Woods dropped by the studio to talk about his Web site, hollywoodpoker.net. James commented that he was on “Late Night with Conan O’Brien” last night, and that as soon as he got to the studio, he was told he couldn’t specifically name the Web site he was out promoting on the air. Even though James had already done “The Tonight Show” without incident, he said lawyers at “Late Night” insisted that, due to contracts NBC had with other poker sites, he could not talk about hollywoodpoker.net. Not having anything else to discuss with Conan, James told Howard that he brought up his Web site on a number of occasions, and that the censors bleeped out the word “Hollywood” each time he brought it up. Gary came in and reported to Howard that they too might not be able to let James give his site’s name on the air. Gary explained that because other poker Web sites pay to run ads on the show, there was a conflict as to whether James could come in and, without having to pay, get the same publicity. Tom also entered the studio and informed James that he could promote any “.net” address he wanted, but he couldn’t talk about “.com” addresses. Howard commented that even though some movie studios pay to have their films talked about on the air, other guests are also allowed to come in and talk about different movies they’re in that don’t do such advertising. Given this, Howard pointed out that it seemed to be a double standard. However, all Tom could do was assure Howard that was just the way it worked.

Cards With the A-Listers

After talking about a game of poker the crew played recently where Howard turned Gary into a “chip bitch” following the very first hand, James mentioned that he just played a $10,000 game with people like Leonardo DiCaprio and Toby Maguire. Howard wondered if when guys like that got together all they talked about were the women they were getting. James responded that Leonardo and Toby are two of the nicest guys he knows, and that they are each totally committed to their girlfriends. James admitted that if he were as young, rich and handsome as people like Leonardo and Toby, he would never be able to stay as grounded as they are. Robin wondered if that comment meant that James is still a serial dater, but he assured her he wasn’t. James went on to explain that he is more like a spree-killer dater, because he only does three or four girls at a time.