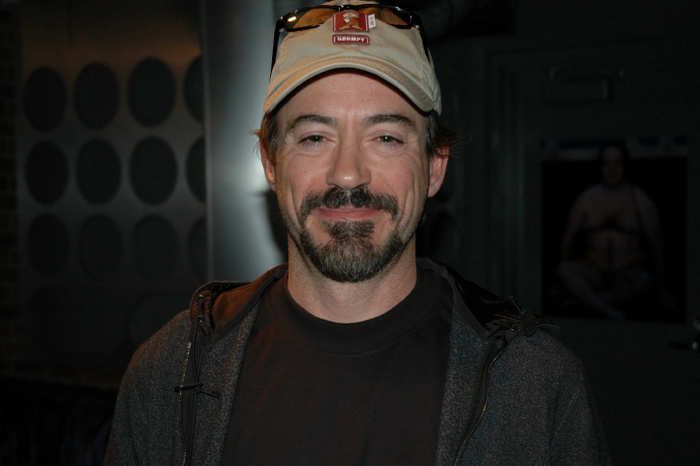 When Robert Downey Jr. came into the studio, Howard mentioned some stories he had read about him that allegedly occurred during his drug days.

After Robert denied the reports, including the one that he ran down the street in a Wonder Woman costume, Howard asked Robert if he ever found it difficult to “score” because of his fame. Robert responded that since he relied on various friends to get him his drugs, he didn’t have to hit up dealers on the street, so his notoriety was never an issue.

Robert then commented that he doesn’t think drugs should be legalized, because doing so would essentially give people permission to try things which they couldn’t deal with.

From a Hotel to the Slammer

Robert brought up that he spent 16 months in jail a few years ago because of his drug habit, but that he didn’t mind it after a while. Gary reported that Robert got arrested after someone called 911 and revealed that Robert was in a hotel room with cocaine and a gun. Howard wondered if Robert found out who the caller was and if he was mad at him for his act.

Robert said he did, in fact, know who the caller was, but that he wasn’t angry. Robert went on to explain that when you’re living that kind of life, it sometimes takes “tough love” from the people around you to get you to straighten out your act.

Howard mentioned that he follows every law because his biggest fear is going to jail. Robert pointed out that if you can survive the first 36 hours of a prison sentence, which he said is the time you actually realize you’ll be spending holidays with criminals, then you can get through the entire time.

Robert proceeded to explain that the lines in prison are drawn strictly by race and that if someone from a different group disrespects someone from your own race and you don’t retaliate, then you’re in danger of being attacked by your own group as well.

Given this, Robert admitted that he got into one fight in prison after a fellow inmate used more phone time than he was allowed. Although Robert said he won the altercation, he added that it wasn’t until after he got out of jail that he began studying Kung Fu. Howard pointed out that was a smart decision just in case he ever gets locked up again. Howard also mentioned that he’d be embarrassed to expose his manhood in the shower at prison, but Robert told him when you’re incarcerated and worried about surviving; you tend to not place that much emphasis on such matters.

Back to What He Does Best

Robert is starring in the new movie, “Kiss Kiss, Bang Bang,” which Howard pointed out has been getting great reviews. Robert commented that he enjoyed making the film, and that he didn’t spend much time focusing on the fact that he had to kiss his costar Val Kilmer during shooting.

Robert then expressed some disappointment that Howard hadn’t watched the copy of the movie that was sent to him and Howard apologized for that. Howard added that he thinks Robert is one of the best actors working today and that he’ll be watching his copy of “Kiss Kiss, Bang Bang” soon.