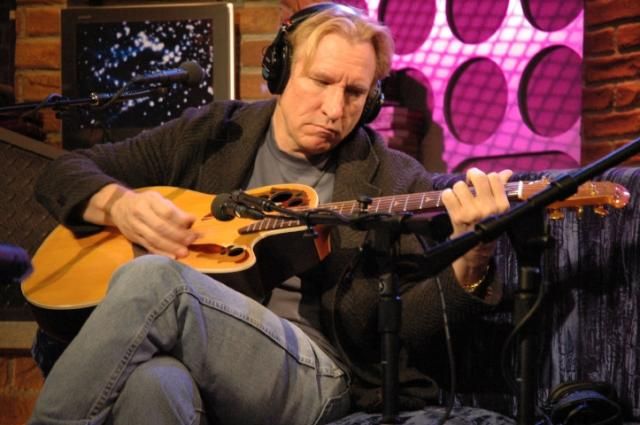 Legendary rock musician Joe Walsh made his long overdue return to the show this morning. Howard said that they haven’t seen Joe in 11 years – ever since Joe freaked out about something that happened a long time ago. Howard had explained that Joe performed a version of “Desperado” for the

Channel 9 show but later changed his mind and didn’t’ want it to air but it was too late. That caused some tension between Joe and fellow Eagle, Don Henley, and Walsh hadn’t been on the show since. Joe said he’s always loved Howard and the show and he just had to get his life cleaned up, that’s all. Now he’s completely sober and healthy and feeling great. Howard said he looked great and said he never thought he’d live this long.

Joe is currently touring with the Eagles and Artie was excited because he’s going to the show tonight. Joe said it kind of bums him out that there are more grandmothers in the audience than young, hot chicks but he still loves performing. Walsh also revealed that he had gotten married and had two sons aged 9 and 6 (or something close to those ages). Howard reminded Joe of a joke that Walsh played on him once. Joe was teaching Howard how to do some chords a gig one time and Howard was on stage trying to do them. Joe told him he had turned down Howard’s amp so the audience wouldn’t be able to hear him that well with the band playing but in reality Joe turned Howard’s amp all the way up so everyone heard every note he played!

Howard and Joe traded a few more stories before Joe brought out the acoustic guitar and performed some parts of the songs “Confessor” and “Life’s been good to me so far”. Howard played Joe the version of “Goodnight Irene” that he and James Taylor did together many years ago on the show. Howard said that was his favorite version of one of his favorite songs of all time. Joe said he was hearing it for the first time and thought he sounded pretty good.