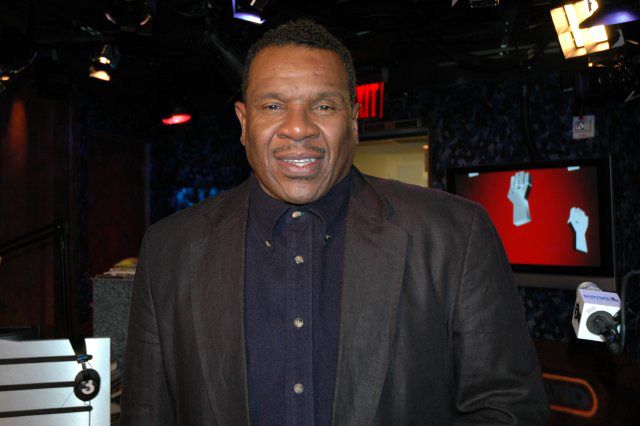 Roy Simmons, the former New York Giant and Washington Redskin player whose new book, “Out of Bounds,” recently hit shelves, came into the studio. Howard explained that Roy has led a hard life, not only because he is the only openly gay former professional football player, but also because he became a drug addict and prostitute once he left the game. Roy told Howard that he thinks there are at least “one or two” homosexual players on each NFL team and then went on to tell a story about the time he had sex with a former Giants teammate of his. Roy then admitted that he occasionally made anti-gay remarks when he played professional football in order to fit in with the other players, but added that he tried to avoid doing that as best he could.

Howard wondered if Roy looked forward to showering with his teammates after games the way he would look forward to showering with a bunch of Playboy Playmates, if he could. Roy replied that, although he sometimes glanced at some of the men around him, he didn’t treat his time in the shower inappropriately. However, Roy did acknowledge that when he got his first exposure to naked males as a high school football player, he appreciated shower time then more than he did when he was a pro. When Howard then asked if Lawrence Taylor is as “big” as he says he is, Roy assured him that L.T. is “heavily endowed.”

After discussing the fact that he was raped when he was 11 years old, Roy said that he spent all the money he earned in the NFL on cocaine. Although Roy commented that he wished he still had the money, he also said that he’s thankful just to be alive to tell his story. Roy went on to say that he used to earn up to $1,000 a night when he worked as a prostitute and that his former promiscuity led to him contracting HIV. Roy then noted that he hopes “Out of Bounds” will help some people avoid going down the same path.

As if being a drug addict and prostitute wasn’t enough, Roy told Howard that he also had the NFC Championship game ring he earned as a member of the Washington Redskins stolen and that he’s been homeless on more than one occasion. Roy added, though, that he’s now in better shape financially than he was a few years ago, and that he’s working on reestablishing a relationship with his 24-year-old daughter, who Roy said he had with a woman while he tried to hide his homosexuality.