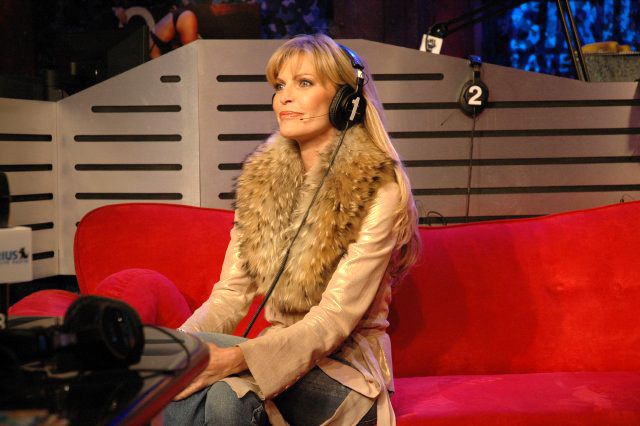 Larry King’s wife, Shawn, came into the studio to talk about her recording career and her marriage. Howard mentioned that he thought Shawn was extremely attractive, and was surprised to find out that she was a millionaire before she even met Larry – which meant she didn’t marry him for his money, as many had assumed. Shawn responded that, not only did she have her own money from the start, but that Larry didn’t make her sign a prenup before they tied the knot. In addition, because of her strong Mormon beliefs, Shawn claimed that she and Larry did not have sex in any way before they got married. Gary brought up that, during their first date, Larry had it set up so Al Pacino was at the same restaurant as him and Shawn, and arranged for him to approach their table to say hello. Upon finding out that the rumor was true, Howard asked Shawn if that move turned her off, but she said it didn’t. Howard went on to ask what would’ve happened to Shawn’s relationship with Larry had she found out they weren’t sexually compatible on their wedding night. Shawn assured Howard, though, that she and Larry got married within a year after meeting, so there wasn’t a very long wait, and that she heard from people that he’s “a good guy” when it comes to sex.

Shawn commented that she had to wait an extra six weeks after they got married to have sex because Larry had had an angioplasty right around the same time and needed time to recover. Shawn then said that she and Larry have a good sex life now, noting that he even dresses up in an Indian costume for her occasionally. After Robin pointed out that she’d never be able to get the image of Larry in a full head dress out of her head, she added that Larry could’ve died between the wedding and his first night with Shawn because of his heart condition. Shawn admitted that was true, and then joked that was her plan since she didn’t have to sign a prenup.

Howard asked Shawn if she was startled when she saw Larry naked for the first time. Shawn said she wasn’t, although she did admit to dimming the lights a bit – just for effect. Shawn then refused to tell Howard how many times a week she has sex with Larry, before mentioning that they keep in touch with each other on the telephone when Larry travels. Howard proceeded to ask if that meant Shawn and Larry engage in phone sex, but Shawn wouldn’t get into the details of that either. This led Howard to again say how attractive he found Shawn and that he couldn’t figure out what was wrong with her.

Because of her strong belief in the Mormon faith, Howard wondered if Shawn wears “sacred underwear.” Shawn said that she does wear “sacred underwear,” and that, to her, they represent “promises and reminders.” In fact, Shawn, who insisted she was sporting a pair of “sacred underwear” this morning, went on to note that her underwear is so scared to her that Larry has never even seen them. After Artie asked Shawn if she makes Larry wear “sacred diapers,” Shawn reported that Larry doesn’t share in her Mormon belief and that he’s agnostic. Robin pointed out that, based on who his current wife is, she thought Larry would have believed in some higher power.

Howard announced he was going to play some songs off Shawn’s new album, “In My Own Backyard,” and proceeded to play a few clips of Wendy the Retard singing karaoke. Howard then played “Find Me,” which is the current single off “In My Own Backyard.” While the song was playing, Howard asked Shawn if she and Larry have ever had sex to the tune. As Shawn was telling Howard that they hadn’t, Gary came into the studio and reported that Shawn’s manager, who happens to be her father, was in the green room and wasn’t approving of the interview. Shawn responded that she was sure her dad was getting upset because of the discussion she had about her “sacred underwear.”