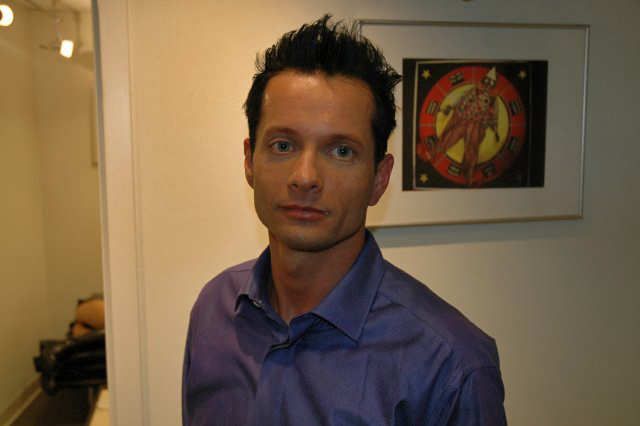 A man named John Paulus came in today to report on the allegation that he had sex with “American Idol” runner up Clay Aiken, but while he was getting situated Howard had to take a quick pee break.

Howard took the wireless mic into the bathroom and peed, while still on the air. Nick DiPaolo, who was sitting in on the show today, told Howard that if you’ve got a bad prostate you have to put your finger under your sack and push. Howard tried it, and quickly realized that he needs a mic stand in the bathroom because he pees on his pants, can’t button his jeans back up and can’t wash his hands while holding the microphone. Howard also said that his paper towel holder rips every towel, and he wants it looked into.

John, meanwhile, was a former Green Beret, an Army Ranger, and top of his class in both. Howard wondered how John could prove his allegations so that he doesn’t get sued.

John said he took a lie detector test and passed. He said that he came out with this because, initially, he was angry with Clay for being a hypocrite. He plays to Christian women and talks about the bible but behind the scenes he’s just a cold and calculated guy. John explained that they talked on the Internet for a few weeks and Clay told him that he wanted a discreet boyfriend. John was a little surprised that it actually was Clay, but he claims that it was and they finally met for the first time at a hotel, where Clay told John to get a room.

Stern Show executive producer Gary Dell’Abate said that he believes it because there are a lot of details in the transcripts of their instant message history.

Staffer Richard Christy said he saw Clay in a store once and he’s a big dude, leading him to believe Clay probably ripped John apart when they got frisky. John said he’s gotten a few death threats since he came out with this allegation. John announced that he signed a porn contract and will be appearing in a film soon. He said that he was a real estate agent and was fired from his job, because of coming out with this and because his company saw nude photos of him on the Internet. He said that in North Carolina, everybody is a Clay Aiken fan, so no one believes the allegations. A caller thought it was just a goof and that John duped Howard just to get on the air and plug his website. Howard said that he’s in every newspaper being interviewed about this and he’s just doing an interview with this guy and that he understands that he’s got an agenda, he’s just trying to promote this through mass media. Howard thought that it didn’t sound like he was even that attracted to Clay, it was just the American Idol draw.

John said that it wasn’t a pleasurable experience, but said that it wasn’t his goal to have sex with him for the story. John said that Clay got aggressive with him and wanted sex badly, but John told him that he didn’t want it right away, but got caught up in the moment. He said that he was very nice at first and told John that he was nervous too, so not to worry. He said that Clay’s penis has distinguishable marks on it, but he wouldn’t give any details, at first. He said that he doesn’t want to disappoint anyone. Howard complained that he was outing the guy, but he wouldn’t talk about how big his penis is. He said that Clay’s penis had 3 little bumps on it, but that was all he would give up tell. John said that he could have stopped it at any time, but Clay was definitely forceful with him. A caller told him to stop saying that he’s a Green Beret because he’s giving them a bad name and they’re not fags. Another caller said that he’s a huge fan of the show, but the gay stuff has to stop. Howard joked that he was having trouble understanding how the scenario looked and asked Artie and Nick to act it out. Howard then played some clips they made from Clay’s audio book.

John said that he and Clay had unprotected sex (Clay pitched) that seemed to last a long time. He tried to get up a few times, but Clay just kept pulling him back down, talking dirty to him. He apparently finished on his own stomach and then told John to go get him a towel to wipe himself off. Howard asked if it was hard to take a dump afterwards and Nick chimed right in saying that it probably just fell out at that point, kind of like emptying a pocketbook. When Clay was getting dressed, John asked for his phone number, but he just pointed to the washcloth and told John to take care of it. John took the washcloth originally planning to throw it away and even offered to give it back to Clay during future chats. John tried to get an apology out of him, but Clay wouldn’t give it to him.