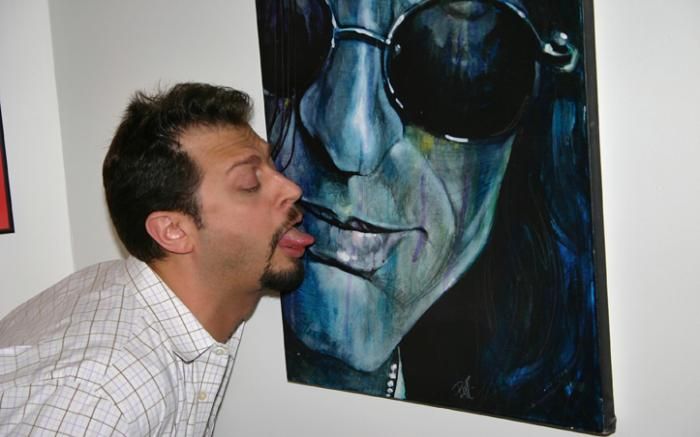 Photo: The Howard Stern Show
Jon played a clip from earlier this week when Howard wasn’t sure if he got rid of the tissues which held the results of his masturbatory nightcap from the night before. Given his uncertainty, Howard announced on the air that he wanted someone to go to his apartment to make sure he had flushed the offending tissues or if he left them on his nightstand, a mission he ended up giving to Gary. After the clip, Gary noted that Sal charged into the studio as soon as Howard said he wanted someone to go to his apartment to look for his tissues and that, if he’d have been allowed to do so, he would’ve rummaged through Howard’s refrigerator and Beth’s underwear drawer as well. Sal admitted that he would’ve taken a look around had he been asked to do the deed, but that he would’ve done so on behalf of Howard’s fans. Gary responded that, as nice as Howard’s apartment is, he doesn’t think it’s as glamorous as Sal has envisions it to be. However, Sal noted that he wants to be a part of Howard’s life outside of the studio so badly that he’s sure he wouldn’t be disappointed by Howard’s apartment. Sal acknowledged that he’ll occasionally watch the discussions Gary and Howard have during breaks to try to read their lips to figure out what they are saying about him. Gary then noted that he wasn’t grossed out by the thought of searching for Howard’s tissues – which Howard had, in fact, flushed – and he wondered how Sal would’ve handled the situation had he discovered them. Sal responded that if he found the tissues, he would’ve saved them and tried to impregnate his wife with their contents. Sal went on to claim that he hasn’t kept any of Howard’s discarded items from the show, although, for a while, he did hang on to a strawberry carton and piece of pita bread that Howard didn’t want before finally throwing them away.
Previous Show Next Show