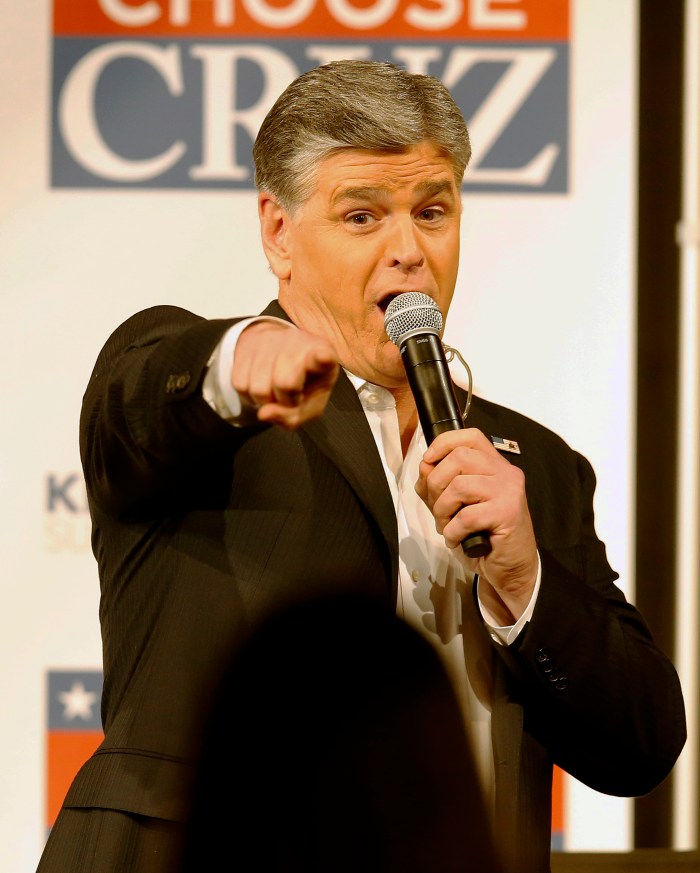 Howard started the show by bringing up the two-hour interview he did yesterday on Sean Hannity’s radio program.

Howard said that he liked visiting Sean’s station, WABC and that he brought his agent, Don Buchwald, and Ronnie the Limo Driver with him to the interview. Howard explained that Sean has a number of televisions in his studio so he can follow the various news networks during his broadcasts, as well as a room full of liberal, attractive women.

Ronnie came into the studio and reported that the women, who are Sean’s producers and interns, immediately told him what big fans they are of Howard’s show and they wondered if they could attend a Scores party with everyone in the near future.

Howard reported that, at one point during his interview, he told Sean it’d be okay for him to admit he was attracted to the women who work for him, but that Sean wouldn’t do so because of the strong relationship he has with his wife. After Howard pointed out that he told Sean that “just looking” at other women doesn’t mean that he’s being unfaithful, Artie commented that he thought Sean’s response to the situation was a way for him to not offend any of his more conservative listeners. Gary then came into the studio and said that he enjoyed Howard’s discussion with Sean about gay marriage. Howard responded that Sean’s convinced gay marriage is bad for children because, according to his logic, all children should have a mother and a father in the household. When Robin noted, though, that she doesn’t feel gay marriage has anything to do with raising children, Howard agreed and added that many children who have heterosexual parents don’t live with both their mother and father.

During one of the commercials on Sean’s show, his wife called her husband on his cell phone and requested to speak to Howard. Howard said that Sean’s wife reported that, although she wasn’t injured, she had just been in an accident that totaled her car and that she wanted Howard to tell Sean about it – without alarming him. Howard recalled that he just smiled and told her that he understood then waited until they were back on the air before he broke the news to Sean. After telling Sean about his wife, Howard asked why his wife couldn’t tell him about the accident herself, especially if their marriage is as strong as he claims it is. Gary added that Sean responded to Howard’s question with the first of his five tongue-in-cheek “shut ups.”

Howard mentioned that another topic that came up during his talk with Sean was God, and that Sean insisted to him that people can’t be moral if they don’t have faith in “Him.” However, Howard replied to Sean’s comment by pointing out that was his opinion and that he shouldn’t dismiss other people’s beliefs. Then Artie commented that good atheists are sometimes considered the best people because they lead good lives without the fear of answering to God forcing them to.

Howard said that, despite their differing political views, Sean understands the importance of this lawsuit, especially because it involves one man being sued by a company with unlimited resources and exposure and that such an action could be taken against anyone in the entertainment industry. To illustrate his point, Howard went on to talk about the contributions Dan Rather made to CBS before he was unceremoniously fired because of a judgment in error he made in broadcasting a story that turned out to be false.

Howard admitted that some commentators have claimed his lawsuit with CBS could be a publicity stunt on his part. However, Howard noted that such an opinion makes no sense, explaining that, in order for this to be the case, he and Leslie would have to be in “cahoots” with each other. Howard went on to explain that his suit with CBS is real and that he’s being accused of “terrible things” in it. Howard proceeded to play clips of commentators, including Fox’s John Gibson and MSNBC’s Keith Olbermann, talking about his Monday night appearance on “Late Show.” Following the segments, Howard reported that he’s now done with Stage One of his fight against CBS and that, after he “hibernates” for a while, he’ll launch into Stage Two.

Howard again mentioned that the women who work on Sean’s program were so attractive that he wants to have a contest with the girls from SIRIUS to see which ones are better looking. Ronnie came back into the studio and reported that the girls who work for Sean were really interested in going to Scores with Howard, and that Howard should make arrangements for such a party. Ronnie went on to say that last night he pleasured himself while thinking about some of Sean’s employees, which led him to note that he couldn’t believe Sean doesn’t do the same thing from time to time, especially because he has to work with them every day.