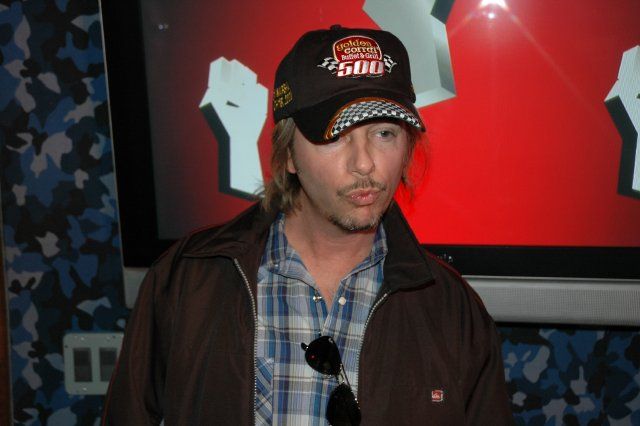 Howard announced that he’ll be on an upcoming cover of Entertainment Weekly, and that one of the magazine’s reporters, Josh, was sitting in the studio for the next segment. As David Spade made his way in for the interview, Howard recalled that he thinks the best cover he’s ever done was the last time he appeared on the front of Entertainment Weekly holding a baby with the headline “Who’s Afraid of Howard Stern?” written on it. After Howard wondered what parent would let their baby to be on the cover of any magazine, Robin pointed out that David was growing facial hair. David responded that he hasn’t been working on television lately, so he’s been “experimenting” with his look.

Howard asked how David gets away with the jokes he tells on “The Showbiz Show” that are at the expense of his celebrity friends. David acknowledged that he’s upset some of his friends with the jokes he’s done on the show, including one that bothered Brad Pitt, which led Howard to wonder how they know each other. David told Howard that he met Brad on the set of “Saturday Night Live” shortly after Brad had filmed “Thelma and Louise.” David went on to explain that Brad wasn’t very famous at that point, and that Brad wanted him to meet some of his family members, who he said were fans of “Tommy Boy.” David added that he and Brad have kept in touch ever since.

Howard asked David if he’s dating anyone and he said he recently got out of a relationship with a woman his age – a number he doesn’t ever reveal. Gary then came into the studio and reported that, while looking for David’s age on IMDB.com, he read that Spade allegedly has a tattoo of Calvin from the Calvin and Hobbes comic strip. David responded he does indeed have the tattoo and that Sean Penn gave it to him. David explained he needed a segment for “Saturday Night Live” at the time, and he decided that recording Sean inking him would fill that void. David added he chose the Calvin tattoo because it was the easiest one for Sean to draw, and that he now regrets going through with the bit.

While Howard was talking about how he and David have hung out socially in the past, he remembered a time at a Grammys party when they saw Christina Aguilera. Howard mentioned how he approached Christina, whom he admitted he didn’t know personally, and introduced her to David. However, Howard noted that David “struck out” with his opportunity to get anywhere with Christina, especially because David asked her what she was doing at the Grammy ceremony when she had just won a few awards that night. David admitted the story was true, and added that he recently saw Christina and her husband at another party and that Ellen DeGeneres, who he said didn’t know Christina was married, tried to set them up, only to be told that she wasn’t available.

David said he watched his new movie “Benchwarmers” with a test audience last week, and that it seemed to get a good response from the crowd. David went on to predict that the movie will do well at the box office, although he noted that a few other potentially big movies open at the same time.