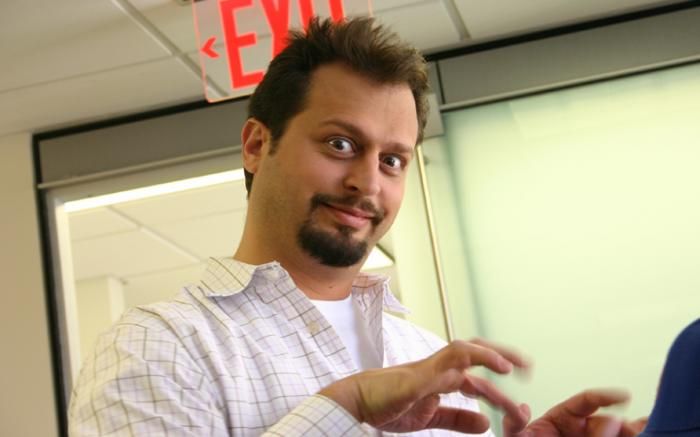 Howard mentioned that Sal, who had a cold at the time, recently used his megaphone and that he had to reprimand him privately about it. Howard said that he doesn’t want people touching his belongings without permission and that he warned Sal that he could potentially lose his job if he keeps up his bad behavior. Sal came into the studio and claimed that he didn’t have the words to express how sorry he was for using Howard’s megaphone, before adding that his job “means everything to him.” As Sal was explaining that he used poor judgment in this case, Gary began waving a rubber penis in his face, turning the tables on Sal, who did the same thing to him earlier this week. Sal then pointed out that he’s been having a rough time at work as of late, noting that he had to meet with the human resources department yesterday to talk about his recent admission that he sometimes pleasures himself in the SIRIUS building.

During his apology, Robin pointed out that Sal always seems to show remorse “after the fact” and that she was convinced he’d act inappropriately again regardless of the promises he was making. Sal responded that he didn’t want to hear Robin’s opinion on the matter and that she shouldn’t have interrupted him while he was talking to Howard. Sal also noted that Robin was siding with Howard because of the Mercedes he bought her, before referring to her as “the weasel behind the bully.” While Sal was making his comments, Robin yelled back at him, saying that she hoped he gets fired from his “stupid, little job.” Although Howard demanded that Sal apologize to Robin, he refused to do so. Sal then claimed that he had a lot of debt and that has been affecting how he acts at work. When Artie pointed out that the amount Sal was in debt was about the same as what Robin probably paid for her boat, Sal told Robin that she should name her boat “The Sal is F’d.” Ralph called in to say that he thought Sal will lose his job within a year, while Angry Black also got on the line and mentioned that he’d amputate his own leg to have a chance to work the show. Howard told Angry that, as intrigued as he was with the idea of him cutting off his leg for a job, he didn’t think he’d hire him even if he went through with it, so he shouldn’t bother.

While Fred was giving his thoughts on the argument, Sal told him, via intercom, to “shut the f’ up.” Fred responded that Sal should come into the studio and say that to his face so he could then “knock his block off.” As Sal entered the studio, Fred pointed out that Sal never wants to take the blame for his mistakes and that he also accuses people of ganging up on him whenever they disagree with him. After Sal apologized to Fred for his remark, Fred insisted that he do the same to Robin, which he did.